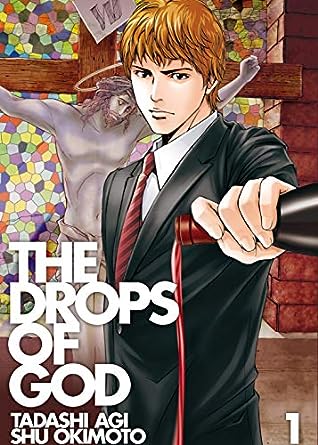 A lot of Western people out there think that manga is for kids, but a lot of those people tend to be only superficially familiar with the manga format, thinking of the popular shoujo and shounen anime and manga that have made their way into the Western pop-cultural lexicon. And yes, it's true that a lot of the manga readily available in the United States and Europe are aimed at middle grade or young adult level audiences, there are a lot that aren't. Shoujo and shounen manga have a big sister and big brother in the form of josei and seinen manga. Sadly, they're a bit harder to find in English.

THE DROPS OF GOD is a seinen manga, which means that it's targeted for adult men (probably beginning around the new adult age bracket, in this case). It's a fascinating story about the son of a gifted wine critic. Shizuku Kanzaki is the son of Yutaka Kanzaki, but they have grown alienated over the years. Shizuku even started working in the beer industry to spite his father. When he finds out about his father's death, he's devastated... and then angry. Because his father has found yet another way to judge with and fuck with him from beyond the grave.

In a posthumous test, he's left behind a list of descriptions that Shizuku must match to wines, and he's appointed a lawyer to see all this out. Worse yet, Shizuku finds out that Yutaka adopted another son named Issei Tomine, another esteemed wine critic. Oh, and that toast that the lawyer poured them on dad's death bed? Yeah, it was another test. Shizuku has a week to not only identify the wine but match his descriptions of it to his father's, or he doesn't get to live in the family home.

Luckily, Shizuku isn't alone. He has a friend named Miyabi, a training wine sommelier he helps out in the very beginning of the book with a difficult customer. Her boss is also a darling (I forget his name, but he has an Errol Flynn mustache). The whole book is about them bonding over wines as she helps him train to battle Issei, and he helps her when she accidentally breaks an expensive and irreplaceable vintage that the snooty owner of the wine bar needs to impress a customer.

I'm sorry to say that a lot of the shounen and seienen manga I'm familiar with don't have great female representation. The portrayal of women is either rooted in stereotypes or else blatantly sexualized. Miyabi, however, was drawn in a normal-looking way (i.e. no huge breasts) and was charming and friendly in a way that a normal woman would behave towards someone she liked. And Shizuku was worthy of her! Not only is he cute, but he has a charm and artlessness to him that just makes him really likable. Plus, he stepped in to help her when she needed it without asking anything of her.

I hope they end up together. I ship them.

Is there an obligatory panty shot? Yes. But the book pokes fun at itself over it and Shizuku isn't creepy about it. There's also some really fan-servicey drawings of the dudes, particularly Issei, who I thought was so hot. I stan a hot, dark-haired man with thick eyebrows and glasses, okay? The fact that he is icy, arrogant, and apparently kinky in bed only adds to his charm. DON'T JUDGE MEEE.

My one caveat to this book is that it is VERY HEAVY in wine facts and wine lore. I am from California and when I am not in fucking quarantine, I'm always going out for wine. I've been on wine tours and read books about wine-making and terroir. Everything in this book that I recognized checked out, and while I didn't look up everything (ugh, work), based on my knowledge, the statements in this book seemed feasible or at least correct. I found the back and forth between the hero and heroine on wine fascinating and loved all of the kooky characters they encountered who shared the passion. I think if you hate wine or aren't interested in wine, Drops of God might be boring for you, but if you fancy yourself a wine connoisseur, you'll love this manga all the more.