Chosen Ones by Veronica Roth 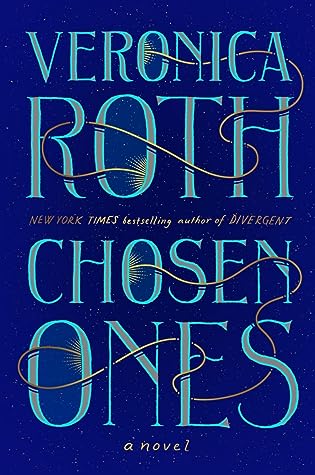 I was not a fan of DIVERGENT or CARVE THE MARK, and found both to be very much soulless "cash ins" based on current trends. And yet, despite that, the idea of CHOSEN ONES appealed to me because of its very simple and yet original premise: what happens to the chosen ones after they complete their mission and defeat the evil force disturbing the universe? Veronica Roth is also the latest YA author jumping about the "let's write for adults now" trend (including Sarah J. Maas and Leigh Bardugo), and after reading Maas's utterly abysmal take on "adult fiction," I was curious to see how Roth would fare.

Our narrator is a young woman named Sloane, who, along with her friends, Matt, Ines, Esther, and Albie, were part of a prophesied group who would take on the Dark One. Despite his cheesy name, the Dark One is a genuinely terrifying figure who creates these events called "Drains," which are basically tornadoes made of magic that literally pull people apart.

They were victorious and are now idolized by the public as somewhat of a cross between demigods and A-list celebrities, but Sloane is feeling embittered about her victory. There's something about "peaking" in your mid-twenties that's kind of disturbing, knowing that nothing you do will ever match up to that last battle. She also has serious PTSD from her traumatic battles, and guilt from not being strong enough. Everyone in their group had their own roles to fill, and Sloane fell neatly into the jaded and sensitive slot way too easily, and it's kind of sad how (most) of her friends use that against her or give her a hard time about it.

Then, one day, the ex-Chosens are called in by their old government handlers and debriefed on inexplicable phenomena happening all over Earth. There's a possibility that the Dark One-- or someone like him-- has returned. And then, in part two of the book, all of our heroes find the rug-- and the world as they knew it-- literally pulled right out from under them, plunging them into a terrifying world of magic, mystery, and death. They're going to have to go to battle again, and this time, all of their demons will be joining them, and Sloane is absolutely terrified.

I debated about what to give this book. It engrossed me from the beginning but there were things about it I didn't like as much. I think the world-building is interesting but cheesy (once again, as in DIVERGENT, the story is set entirely in Chicago, which is fine, but begs the question of what the world is like outside of Chicago and even the U.S.? This is never really answered satisfactorily). Not bad-cheesy, but comic book-cheesy, which given this book's premise, actually makes it work better than if it had tried to take itself too seriously. Parts of this book reminded me of Brandon Sanderson's STEELHEART, especially with the idea that superheroes can be morally ambiguous, and other parts reminded me of Animorphs, especially the reluctant hero aspect and the team dynamic.

I do want to say that like HOUSE OF EARTH AND BLOOD, this doesn't really read as "adult." All of the characters are extremely immature and read and act like children, to the point where I had to repeatedly remind myself that they were not. If I were being generous, I might speculate that part of this is due to the trauma of "peaking" at an early age, and emotionally they are trapped in the minds of their teenage selves, much like how child stars who are unable to deal with their fame sometimes act like rebellious teenagers well into their twenties and thirties. But the narrative and the story also feel very "YA-like," so as an "adult" work I almost feel like this would have been better marketed towards a young adult audience, despite the swearing and references to substance use, which did not feel particularly excessive and weren't, in my mind, enough to bar an older teen from reading it. Part of me can't help but wonder if maybe someone decided it might be more lucrative to market to adults rather than children and if maybe this started out as a young adult book that was tweaked. That would explain why all the adults read as kids, and why the writing feels like it's been coded so young.

Sloane's character was honestly one of the best things about this book, though, if you ignore the fact that she acts like she's about seventeen or eighteen and not in her mid-twenties. I loved the way she was so haunted by her past and allowed to be selfish. Tris from DIVERGENT was the worst, and I couldn't stand her. Sloane, on the other hand, felt real. I could see myself making some of the decisions she did. In the beginning, when she's just trying to survive, I ached for her. Her misery pours off the pages and you really sense what a toll her life took on her. Seeing her plunged into an unfamiliar world and having that be the impetus for her first real steps towards healing made sense: she was finally breaking free of the loop that had kept her in the mind of her younger self.

Also, there's a bad guy in here who is basically Kylo Ren with magic, and if that isn't enough to get all of the villain fangirls out there swarming the book shops, I don't know what is. He even has a metal mask. I'm honestly surprised the Kylo Ren angle wasn't pushed harder by the marketing team, especially since CARVE THE MARK (as I recall) was compared to Star Wars, when the only thing it had in common with Star Wars was space. I loved the Kylo Ren character in this book and won't be saying anymore about him because spoilers, but honestly the world needs more villain arcs like his in stories and I'm glad that Veronica Roth actually did a decent job handling his character.

I think a good comparison to this book, actually, is THE BONE SEASON. The world building can be hokey at times but the story is addicting, albeit slow-paced. If it clicks with you and you're willing to make the effort, it becomes a world you can sink into and won't want to leave. But some people aren't going to click and others are going to be put off by the hokey weirdness, and they're going to give the book low ratings, and that is their right. I'm lucky that it clicked for me and I did find the book the effort (even though it was a slog at times). The only thing I really didn't like was the ending. I feel like so many people harped on Roth about ALLEGIANT that she went in the opposite direction with this book and actually ended up creating an ending that felt too easy, and too neat.

Overall, though, CHOSEN ONES was a really great take on the "chosen ones" stereotype and the world-building is pretty creative and original and I had a great time reading it. Anyone who enjoyed books like Animorphs or STEELHEART is probably going to enjoy this, particularly if they like hot villains and sullen heroines who are tortured by a dark past. I just realized that this is book one in a series, and I'm shocked, because it felt done, but I'm definitely curious to see where it goes from here.