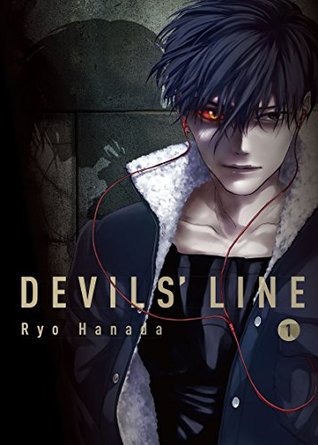 Apparently, K-Pop guys who look like vampires is an aesthetic. And you know what? It's a really good aesthetic. That was 99% of the reason I went for this manga: the dude on the cover looks like he's about to serenade you about how much he wants to drink your blood. *swoon*

Devil's Line is a lot like a more violent version of TWILIGHT that is aimed at dudes. It's a seinen manga, which is like shounen's big brother, and from what I understand, is typically targeted towards men in the 20-30s age bracket. The book opens with a girl named Tsukasa finding out that her friend-zoned buddy is actually a vampire incel who's the main suspect in a whole bunch of rape and murder cases of human women.

The guy who books him is a half-vampire, half-human hybrid named Anzai, who works as a sort of police officer among his kind, hauling in the bad guys who prey on humans and disrupt their way of life. We get to see several of the cases that he's working on before he's put on leave for beating up a teacher who assaults Tsukasa right before Anzai is supposed to meet her for hot pot.

Vampires are referred to as "devils" and they certainly look like them when they transform. Like Bella with Edward Cullen, Tsukasa can tell when he has or hasn't fed by his eyes: he gets this sunken-in, baggy-eyed look when he hasn't had blood, which makes more sense than eyes changing color (although when he turns, his eyes become blood-shot). Also like Edward, he lurks around outside her balcony and watches her sleep, and Tsukasa is fascinated by him because he craves her blood and must resist.

I thought this was fine. As I said, it's basically a darker TWILIGHT, but I liked TWILIGHT even as I wished it were darker, so this ended up working out for me just fine. I probably would have liked it more when I was younger, as both characters look very young. Tsukasa looks like she could be in middle school and Anzai kind of reminds me of "L" from Death Note with higher cheekbones.

Overall, this wasn't bad. I'm not sure I'll continue with the series but I had a lot of fun reading it.