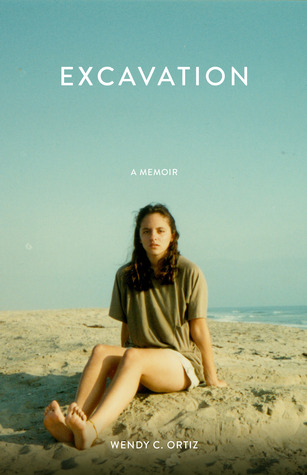 I wanted to read this book because people were claiming that MY DARK VANESSA plagiarized content from this memoir and I wanted to read this to 1) compare both books and 2) see if there was any merit to those accusations. Personally, even though there are some similarities to the books, I find them to be pretty different books that set out to accomplish different things, and that anything they have in common speaks more to the universality of sexual abuse and how internalized misogyny facilitates predatory behavior and the victimization of young girls.

But obviously, that's my opinion and you might feel differently.

Like MY DARK VANESSA, EXCAVATION is about an English teacher who is 10+ years older than the student he grooms to be his victim. Both girls enjoy writing, and are somewhat unsuccessful socially, which enables the teacher in question to play to their insecurities, lauding them as being mature for their age and artistic, and using that alleged emotional connection and longing for something deeper as a way to begin the abuse. The novel LOLITA also features prominently in both, but that's only to be expected. If you're going to have a literary allegory for underage sexual abuse enabled by institutional sexism, it's going to be LOLITA.

Jeff from this book is needy and unhinged, with a clear lack of emotional maturity (which I think is typical among abusers; if you are emotionally mature, you would not be attracted to or find the need to predate on teenagers). He acts as if he were a teen boy, is too friendly with his students, and possessive and careless of Wendy by turns. One particularly chilling scene that happens in here is when he ties Wendy to a chair and gives her a detailed harangue of how she could be raped and killed by hitchhiking, before gagging her, while someone else watches. It made me feel sick.

Jacob, from MY DARK VANESSA, isn't quite as immature, even though he's obviously emotionally stunted and manipulative-- his actions felt much more deliberate and sociopathic. It's also implied that he pursues teenagers because his tastes run much younger, hence the infantilizing games he plays with his victims and his refusal to have children. Vanessa is fifteen in the book and Wendy is thirteen in her memoir. Jeff continues his relationship with Wendy much later, though, whereas Jacob loses interest in Vanessa as soon as she's no longer underage. Both cases are disgusting portrayals of child sexual abuse, but Jacob appears to be a pedophile who likes prepubescent children whereas Jeff seems to be more attracted to young teenagers/adolescents (I think that's called an ephebophile).

Both books have past and present sections. Vanessa is much more broken by her abuse and her family feels more dysfunctional. In the present sections, she has no future and self-medicates with marijuana use. Jacob has succeeded in damaging her self-worth and leaving her unable to form healthy romantic relationships. It ends on a note of hope with her being able to give name to her abuse and find that she might move on, but Jacob has left his damaging mark on her and it's clear that progression is going to be a really difficult and fraught path for her with many backslides.

Wendy, on the other hand, has found a relationship with a woman who cares for her. In her reflections on her past self, she levels much-deserved disgust on predators and the people who enable them by sweeping things under the carpet or not giving credence to victims who report abuse (as she did at one point, only to have nothing come of it). I thought these reflective sections were among the better writing in this book, although when she says that she tells her partner that she reminder her of her abuser at one point, my eyebrows shot up. That felt really gross and hurtful and squicked me out.

But I guess it makes sense, in a way. If someone does something like that to you, it won't be easy to forget. Intimacy is hard to break away from sex, especially if there has been abuse, and that's one of the more insidious effects of abuse: it's hard to separate those two things without trust, and not think of the abuse even when you're with someone you care about. That was also an issue in MY DARK VANESSA. Vanessa breaks up with her boyfriend, who can't stomach the idea that she refuses to condemn her abuser, and she seeks out situations that end up almost replaying the abuse with others.

There is one similar scene in this book but it ends differently than it did in MY DARK VANESSA, and, again, I think that's typical in abuse: it's why some people become promiscuous after abuse. It's a way to regain control, to work out what happened to you in a safe way where you have all the cards. I just read a romance novel that did that, and how the heroine reclaimed her sexuality after abuse by making sure she had all the control and that she could end things at any time. It makes sense to me that women who have been abused might put themselves in dangerous situations that they know they can get away from them, just to "prove" to themselves that they aren't victims all the time.

"Victim" is an exhausting label with many implications and I imagine it must be a heavy burden to bear. This was a topic that was explored at length in MY DARK VANESSA, with the heroine refusing to call herself a victim because she doesn't feel like her case is as black and white as real victims of abuse (her thinking, not mine), and she throws up tons of walls and barriers to draw an us vs. them between her and other survivors, to avoid being branded by that label.

Personally, I think MY DARK VANESSA is the better book. EXCAVATION is done by a small publishing company and reads like an indie work, rough and unpolished. The story is important in the #MeToo age but it doesn't have the neat and linear journey of a more palatable story, and at times it can be very hard to follow. Someone reviewing this book said that it didn't seem to have a "point" and I can see what they mean: Vanessa's book is a path to healing and owning what happened to her in a way that won't break her. It's not quite clear what Wendy's path is here, apart from meditating on what happened to her and how it affected to her. Which is valid, but not really conclusive-- it ends on a vague note, instead of coming full circle in a way that ends up serving a higher meaning.

If you want to read this book for yourself, it's free on Kindle Unlimited right now. I'm glad I read it because I never would have heard about it were it not for the MY DARK VANESSA drama, and I am relieved as a reader that they were not as similar as I feared they might be. My personal takeaway is that abuse often has many universal elements because abusers abuse for the same reasons: mental health problems, power, and warped views about gender roles and (especially) women and girls. Both books are important in the era of #MeToo and show why it's so important to protect and empower young children and especially young girls to come forward when something terrible happens, and what can happen when someone who is in a position of trust abuses their power to take advantage. The fact that these books are similar seems less a case of nefarious actions on behalf of either writer, and more of a reflection that our society has some very deep flaws that need to be fixed.