WtAFW: Leonardo Decaprico Finally Wins His Award And It Pounds Him In The Butt by Chuck Tingle 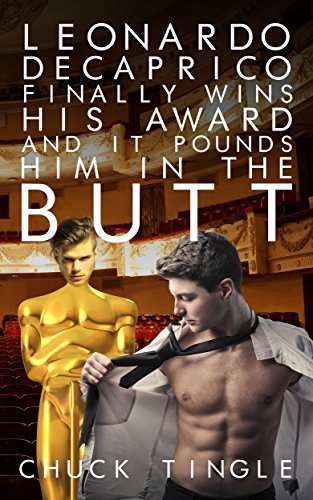 Every week, I read and review a weird erotica or romance that my followers recommend me. Last week, it was shape-shifters who turn into balloons. The week before that, it was a Pokemon Go erotica where the Pokemon pound you in the butt. During What the Actual Fuck Wednesday, anyone can be fucked by anything-- I think this is the takeaway message from this project that I have learned.

LEONARDO DECAPRICO FINALLY WINS HIS AWARD AND IT POUNDS HIM IN THE BUTT was included with POKEBUTT GO: POUNDED BY 'EM ALL. It's the story of a very handsome buckaroo who, despite all his talent and handsomeness, never wins the goddamn award he's got his eye on. Maybe this will be the year? Maybe he'll finally get pounded in the ass by his own award in the middle of his own acceptance speech? Stranger things have happened.

This was actually the worst Tingler I've read to date. There were typos everywhere and it felt like he wasn't even trying. It also wasn't all that funny. With most of his books, there's this fourth wall-breaking meta-humor element and I did not get that with this one. Although the thought of Leonardo Dicaprio seeing this story cracks me up. I wonder if one of his friends has shown it to him?