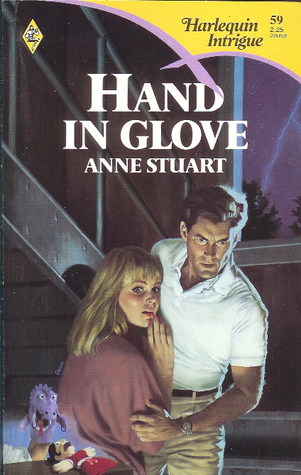 So I have a challenge called WtAFW where I read the weirdest of the weirdest romances and erotica every week and then I write reviews about them. After doing another puppet-themed entry, one of my followers told me that Anne Stuart actually had an old Harlequin Intrigue that was puppet-themed. It's a totally wild romance. The heroine, Judith, has a friend named Lacey who's super flaky and dates the wrong kind of men. Her latest conquest is a man named Ryan, but then late one night, Judith receives a call from her friend claiming that something is wrong. Since the call comes at, like, three am, Judith is understandably annoyed and is like "Girl, check yourself." The next day, she finds out Lacey is dead. Well, whoops.

Judith decides to Nancy Drew it and get a job at the puppet factory to find out What Really Happened to her friend and also Whodunnit. And if you're wondering how heavy a role the puppets play in this book, the answer is 2,000 pound lead weight. THEY ARE EVERYWHERE, these puppets. Which I guess makes sense because this was originally published in the 1980s and there were a lot of puppet-themed children's programs airing concurrently at the time, like Eureka's Castle, Lambchop, Sesame Street, and Mr. Roger's Neighborhood. Which is just one way that this book ends up feeling kind of dated (the other is rampant workplace sexism, in case you were wondering).

The author made the very strange choice to "modernize" this book with updated culture references, which made me guffaw because it so doesn't work. The characters still dress and talk like it's the 80s (linen suits and heavy chainsmoking and referring to female employees as showing up for "mattress duty," and also one of the female characters is obsessed with Phil Collins), but then Vampire Weekend is mentioned twice and a security tape is upgraded to a DVD (although the author forgot to update one of the references, so at some point it's once again referred to as a "videotape"). I wish authors didn't do this. It's easy to say a book is the product of its times if it's frozen in stasis, but if you tamper with it and update some stuff but not others, I can no longer give you the benefit of the doubt.

I ended up skimming pretty heavily because I wanted to see what happened and oh my god, both of the final confrontations involve puppets, including the subsequent deescalation.

The sex scenes were hot and it's interesting to see the sort of starter template for Anne Stuart's trademark gamma heroes (who literally are all the same person, except for hair and eye color), and are all uniformly tall and rangy, and all have attractive silky-smooth backs (Anne Stuart, you a back girl?? me too), but not even the hot hero can save this floundering mess. There is good Anne Stuart and then there is bad Anne Stuart, and I'm sorry to say that this is one of the bad ones.