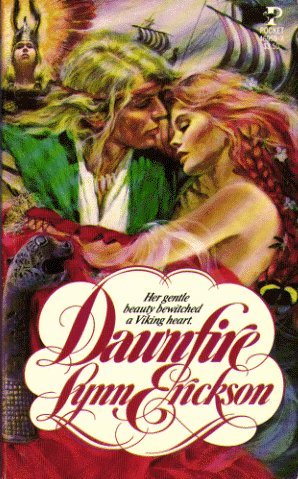 I've been on a bit of a viking kick lately, and when I randomly happened upon this book with its gorgeous Harry Bennett cover, obviously I needed it ASAP. The premise is great. Gaard is a viking who invades a Scottish island called St. Abb. As vikings do, he and his men sack and pillage it, and become the terror of the inhabitants there. The innocent heroine, Dawnlyn, was intended for the church, but Gaard ends up taking her for himself-- not just because she's hot but also because she's the daughter of the Earl, and making her his sends a message to the Scots.

I was expecting some impressive old skool shenanigans but this book was actually pretty tame. After the initial pillaging scene (very toned down), the vikings are pretty chill. Gaard doesn't take advantage of Dawnlyn the way he could and even promises to marry her. At most, it's forced seduction. There's some lite-OW drama and an assassination attempt, but both of these things are resolved pretty quickly and don't drag out over pages and pages, the way they would if someone like Christine Monson or Rosemary Rogers was writing.

This book was honestly okay. I liked it in the beginning but after a while, I got bored. This is like a Zebra romance. It's sweet, it's diet old skool, and it's got vikings without the messed up stuff that makes them VIKINGS! I would actually recommend this book to friends who want to get in on older romances but are put off by the more hardcore scenes. That's not an insult to the book. Even though I found it boring and was sad it didn't offer me the crazy adventures I was looking for, for the right reader, I think this will provide the perfect blend of alpha hero and satisfying romance.