Trainwreck: The Women We Love to Hate, Mock, and Fear... and Why by Jude Ellison S. Doyle 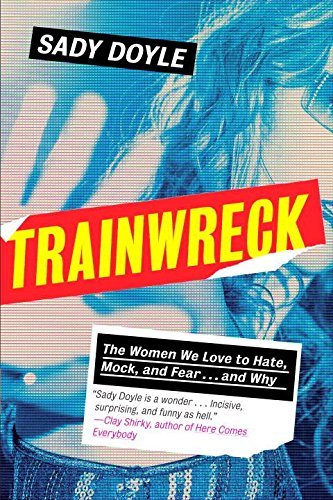 When I picked up the feminist book, FEMALE CHAUVINIST PIGS, I was expecting something more in line with TRAINWRECK. In this book, Doyle takes a close look at how we, as a society, talk about famous women-- specifically, their rise, decline, and fall. Why do we feel so comfortable branding women as failures of human beings for a single mistake that would barely cause a blip in a man's career? Why do men get to be tortured, whereas women are called trainwrecks? Writing about women from Mary Wallstonecraft to Amy Winehouse, Doyle discusses the standards that women are given to live up to, and the cruelty we mete out in judgement when they fail to perform to our standards and expectations, especially with regard to morality.

I LOVED this book. I was expecting discussions of Amanda Bynes, Lindsey Lohan, Britney Spears, Paris Hilton, and Amy Winehouse, but it was also kind of exciting to see the author dig out older case studies as well, like Charlotte Bronte (who apparently may have had a crush on her married Belgian professor, and Jane Eyre might have been lusty fanfiction about him), or Mary Wallstonecraft (who had quite the scandalous life, which was all accidentally unearthed when her husband made the decision to posthumously publish all of her letters), or Monica Lewinsky and Hillary Clinton, both representing two poles on the "I Hate Women" yardstick: the harlot and the shrew.

In TRAINWRECK, Doyle gives nuanced portraits of these maligned women, talking about how they were built up and then crucified, and how the expectations for women are impossible to meet even if you play by the rules (she cites Taylor Swift for this specifically). She also includes women of color (such as Billie Holiday, Nicki Minaj, and Rihanna), and how when they fail or are made to fail, their condemnations are often racist and sexist, with some people criticizing them simply for being in the spotlight at all. But most importantly, I feel like TRAINWRECK gives these women accolades for the weight of their achievements and what they accomplished because of-- or despite-- everything. It is a nuanced, sympathetic portrayal of society's famously difficult women, and as someone who deliberately seeks out books with heroines who do have flaws or are unlikable, I have to say that it's really refreshing to see a book like this, that so unequivocally condemns these toxic double-standards.

I don't often reread nonfiction, but TRAINWRECK is a book I think I might like to keep on hand to reference again and again.