Kidnapped by the Viking by Caitlin Crews 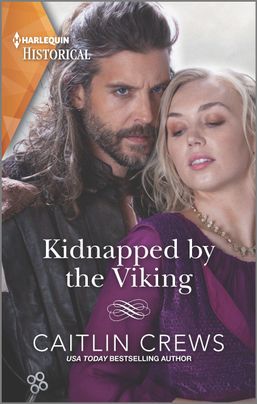 THE VIKING'S RUNAWAY CONCUBINE by this author was one of the best viking romances I've read in a while, so obviously I had to find out what happened next with my new favorite viking family. The hero of the first book is Ulfric, who fell in love with his thrall, even after she slashed his face and ran away. This book is set after the slashing, but before he brings her back, and the romance is between Ulfric's brother, Thorbrand, and a Mercian princess named Aelfwynn.

The book got off to a pretty good start. Aelfwynn is a pawn in her uncle's attempt to wrangle power. She thinks she's going off to a monastery, but the truth proves to be much darker than that when her escorts are intercepted by a band of vikings led by Thorbrand. And at first the political banter between them was totally on point, sexually charged but laced with some pretty serious observations about what it means to be a political pawn in a time of major upheaval.

And then... everything just kind of fell apart.

What I loved about the first book in this series is that Ulfric and Eithne were so obviously two halves of the same whole, and the book had such a deep and profound sexual and emotional connection between them. Here... I didn't really feel that much at all. The sex scenes weren't as good and they lacked the deep, consuming intimacy that the first book had. It was also boring. As someone else pointed out, the abduction took forever, and then it's mostly just Aelfwynn and Thorbrand making out as he takes her back to his viking settlement, until they finally do it halfway in.

I do think the author has a lot of talent and she can write some scorching sex scenes, but this is not one of her best. That said, I chatted with her on Twitter and it seems like she's planning a third book about Thorbrand and Ulfric's cousin, Leif, so I'm majorly excited about that. Crossing my fingers for more action and emotional intimacy, because I just know this author has another five-star read in her.