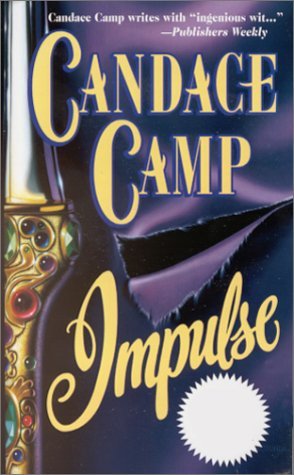 So there are a couple romance tropes that make me go absolutely feral and one of those is a well-written blackmail romance and another is a calm and composed hero who loses his shit only where the heroine is concerned. IMPULSE has both of those tropes, and so many other tropes I love that it was almost as if she had reached right into my depraved skull and written this romance just for me.

IMPULSE is the story of Cam and Angela. Angela is the daughter of nobility (an earl, I believe) and Cam is their stable boy. They've been childhood friends since they met, but recently they became secret lovers. But then Angela's grandfather finds out what they've been up to in the stables and he threatens to destroy Cam and frame him for theft unless she marries the rich asshole he's picked out for her personally. So Angela tearfully marries Dunstan and Cam is then beaten by the grandfather and sent away, and things are off to a pretty gloomy beginning.

Thirteen years later, Angela is divorced and finds out that someone has been buying up her family's shares in a failing mine. This person also wants to marry Angela, and if she doesn't, they will ruin her family. TA-DA! It's a hardened, bitter Cam, fresh from the America's, nursing lust and grievance. Also, apparently Angela's brother, Jeremy, is bisexual, and in addition to bankrupting her family, he threatens to out her brother (which is douchey, but we later learn that he had no intention of actually doing this). With no choice but to save her family, Angela grudgingly marries her childhood lover-turned-enemy, but only after telling him that she has absolutely no intention of having him in her bed.

I don't want to say too much more, but let's just say that there is a TON of well-plotted angst, emotional intimacy, kinky sexy-times (BDSM), a murder subplot that doesn't feel like an afterthought, a quest to find one's hidden family, and a secondary romance that is super cute and takes up just the right amount of page time. Also, Angela has such a truly tragic and horrific backstory. When she reveals what her first husband did to her, my heart broke. And I also liked how both Dunstan and Cam were both kinky, but Dunstan was an abuser, whereas Cam was a consent king. Often plot devices like these end up kind of demonizing kink culture, so I liked that Camp portrayed both the light and dark sides of it.

My only qualm was that the author used a few phrases in her sex scenes that I wasn't the biggest fan of. "Fleshy buttons" for nipples and "male breasts" were a bit too ish and ended up pulling me out of the otherwise really steamy sex scenes. But that's my only petty complaint and I'm not going to down-rate for it. If you enjoyed Meredith Duran's DUKE OF SHADOWS and Meagan McKinney's WHEN ANGELS FALL, then I think you're going to love IMPULSE, as it shares the same theme of obsessive "I've loved you for years" loved, family legacies, and danger. I love, love, LOVED this!