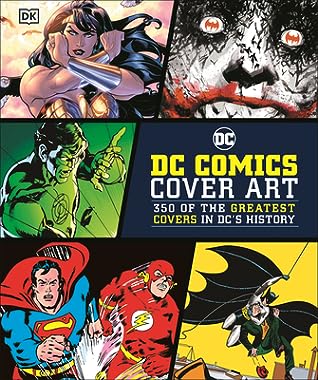 My friends! Why are you sleeping on this book? I know I have a lot of comic book aficionados and art lovers in my social group, and anyone who loves either of those two things is going to love this book. Art books can be hard because sometimes they can feel dialed in. I've read books where the photos weren't great or the captions were bland and uninteresting, so even though I appreciated the subject matter, I wasn't wowed by the book. Well-- not only are the pictures in this book high quality and totally gorgeous, the captions are super interesting, too! I think it's clear that Nick Jones harbors a love for comic books and his captions really conveyed his love of the art, medium, and history, which makes such a difference, I just cannot tell you.

The book starts with the Golden Age comic books of the 1930s, replete with the first "Bat-Man" (yes his name used to be hyphenated) cover and the infamous "Superman" book which I believe was called Action Comics and didn't even have a #1 because he was originally supposed to be a one-off! It goes all the way to the Modern Age (2011-- present), with titles that you could probably see on the shelves if you went inside any comic book store or maybe even a Barnes and Noble (masked up, ofc).

It was so fun to see how the superheroes changed and stayed the same all at once. There are some elements of their designs that remained constant or similar and others that were totally done away with. I had no idea, for example, that the Joker was originally introduced as the "Red Hood" because he was wearing a red bag over his head lol (and they wanted to kill him off in his first appearance!). Seeing the inked lines give way to CGI-enhanced covers was also really cool, and from the 90s onward, you start to see more women artists taking the reins, leading to less sexualized Wonder Womans and Cat Womans and a deeper, more complicated portrait of characters like Harley Quinn and Poison Ivy.

I seriously can't recommend this book enough to comic book lovers. I pored over this in just over an hour and I know I'll be revisiting it again and again for the artwork alone. It would make a great gift or a great coffee table book for that out and proud geek in your life.