The Smartphone Society: Technology, Power, and Resistance in the New Gilded Age by Nicole Aschoff 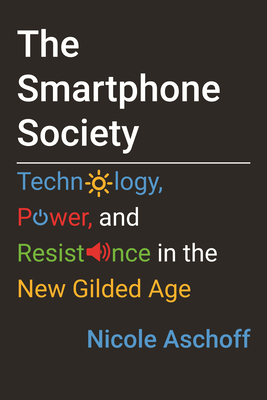 I'm a huge fan of Adam Conover's Adam Ruins Everything, and while reading this book, I kept thinking about his episode, "The Terrifying Cost of 'Free' Websites." The closing argument being that, since the cost of use is our data, we are essentially the products being sold when we sign up for these free social media platforms. Something that seems like maybe it's no big deal at first but ends up being a far more Mephistophelean bargain that it appears when looked at more closely. I mention this because I don't feel like the title of this book is a very accurate reflection of what the book itself is about. I thought it was going to be an apologist take on the saving grace of social media and smartphones, but instead it's a rather nuanced and holistic view taken from both sides. On the one hand, there are ads that can be used to jump over the Fair Housing Act by essentially allowing companies to target housing ads based on age and ethnicity and facial-recognition software being developed by Fortune 500 tech companies might be being used to monitor immigrants and other nefarious purposes. But on the other hand, Facebook Live has enabled people of color to take a hard stance on holding police accountable for racially targeted violence and people in war-torn nations and/or with oppressive governments are taking to social media as a way to protest when doing so in the streets might mean death.

Each chapter opens with a more personal anecdote that then kickstarts a deep dive into various meandering topics that seem only peripherally related at best, at times. Actually, if I have a criticism of this book, it is that it isn't really organized all that well. The chapters are very long and jump from subject to subject. I wish the chapters were more clearly divided by topic. The essays themselves are fascinating, although the book didn't really tell me anything I didn't already know. If I walked away with any takeaway messages, it's that social media has brought us closer to the democratization of resources and information, although algorithms and people being what they are, much of the information that surrounds us is cherry-picked to suit our personal tastes. There is also a disparity of what the internet offers to the poor versus the rich, which shouldn't surprise anyone, and a rather terrifying number of Americans don't seem to understand what a First Amendment violation is. Being "deplatformed" by a commercial website for repeated ToS violations is not a First Amendment vio. The government building a search engine that blocks out certain searches would be a First Amendment vio. Also, if you're a politician using social media within your capacity as a public servant and you decide to block your naysayers from viewing or commenting on your post, that is also considered a form of government censorship and therefore a First Amendment vio, as ruled upon by the courts.

If you work in tech or are interested in social justice and how they intersect with social media and the future of technology. This book is written like a textbook and even though it's interesting, it's very dry and I'm not sure it will find its audience with everyone. I found it fascinating, though, and I think it provides a balanced look at the risks and the rewards of using social media websites.