A Moveable Feast: The Restored Edition by Ernest Hemingway 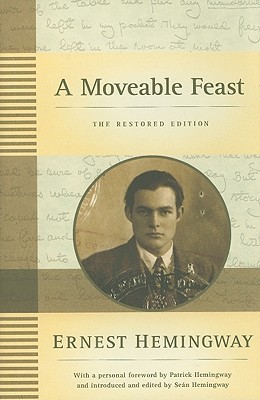 I'd mentally filed Hemingway into the "Crusty Old Authors I Do Not Like" drawer after being bored to tears by THE SUN ALSO RISES and THE OLD MAN AND THE SEA in my youth, and did not touch the drawer again until my mom said, "Hey, you know what you should read? Hemingway's memoirs of 1920s Paris where he hangs out with F. Scott Fitzgerald and all these other famous people." And I thought, hmm, okay, might as well give it the old college try, if only for the inevitable poetic descriptions of the Seine and good wine.

A MOVEABLE FEAST honestly feels like it's been written by a totally different writer. There's a straightforward wistfulness to the writing that imbues the prose with a misty luminescence-- like a streetlamp in the fog. Hemingway writes about the literati hanging around Paris, turning it into their own snooty little writer's club. I had no idea that Gertrude Stein was such a snob, and the way he describes her describing her colleagues-- like a general recounting battles in which he has defeated other generals-- was just so colorful and striking. I found it fascinating how quickly he seemed to grasp the measure of people and cut right to the heart of who they are.

The food and wine descriptions are lovely, and I think people who have been to Paris and know firsthand how expensive it is now will be awed at how Hemingway and his wife were able to get by on so little. This is, first and foremost, a measure of an author struggling to balance his life of the fine arts with an ill-paying job that often leaves him hungry and poor. It's a bit romanticized, but there are unexpected brutal moments, too, such as him choosing to go for walks in the park during lunch hour in places that were far away from food so he wouldn't have to suffer.

The two high points of this book for me were the utter dysfunctionality of the relationship between Zelda and Scott F. Fitzgerald, and learning that apparently Hemingway saw nothing wrong with leaving his favorite cat to babysit his child in the cradle. But I honestly loved the way this was written and while there were some repetitive parts, most of it left me feeling nostalgic for a time I never even lived through because the emotions in his writing were just so strong. I'd never really considered Hemingway a likable guy before but this book really makes him a compelling figure on paper. Color me impressed.