Narcissus Nobody by Gina Yates 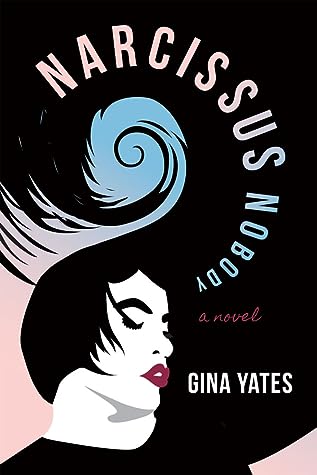 NARCISSUS NOBODY is like the book equivalent of an art film. It is not entirely clear who the audience should be, but you know that whoever enjoys it is going to be thoughtful and educated. It does not feature the traditional sorts of characters, who are likable, conventionally attractive, and successful. It is not particularly happy or linear in its mode of story-telling, and it's weird.

This book follows its main character, Hope, over a period of 20 years, beginning in the early 90s when she is in her early twenties all the way to the 2010s when she is in her 40s. The 90s portion was my favorite job when she's working at a home-care job with the elderly, dating a guy who's obviously using her, and living her best Goth life replete with new wave music and essential oil hippie juice. She's also a painfully awkward and introverted vegan who prefers the company of animals to people.

As the years go by, her relationships shift and she starts to develop more agency in what she's willing to take from partners. Her job also changes: she starts working for a psychic call center, which I found hilarious and unconventional (I love heroines who have weird or unusual jobs). Throughout all of her incarnations, a disgraced "love guru" pops in and out, and we see his evolutionary journey from popular relationship self-help author to disgraced hypocrite to "some men want to watch the world" complete trash fire 180 as he decides to cash in his chips and tell everyone that, guess what, monogamy is for squares-- if you try hard enough, anyone will leave their spouse, so why not try? Um, yike on a bike.

As I said, the beginning was really strong and sucked me in. The later portions were a lot slower and less engaging. I felt like this took me forever to read-- not because it was bad, but because the pacing was off and Hope's older selves just didn't feel as developed and realized as her younger self. I'm not sure if that was intentional or not. Maybe this is intended to show how we're "dulled" as we get older and become more complacent? How miserable. And this book was kind of a downer, tbh. It's not a sad book, but it definitely left behind a sort of residual gloom because the heroine is such a brooder.

I'm also not really sure what the point was. And I know that not all books have points but I like it when a book comes full circle and leaves me with something of value that makes me feel as if the journey was fully worth it. I didn't really get that with this book.