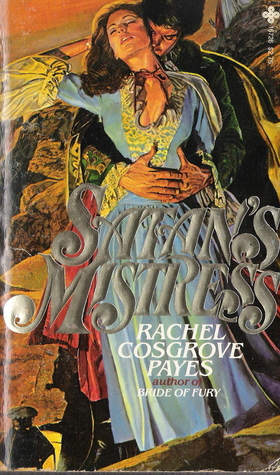 This took me over a month to read. By contrast, if I really like a book that's under 300 pages, I can finish it in just a few hours, and I managed to finish my friends' much-anticipated 450-page tome in under a day. Normally, if a book takes me this long to finish, I call it quits, but with SATAN'S MISTRESS, I felt compelled to finish because I had already clocked in so much time and the beginning is so crazy that I needed to find out how the book would end.

***WARNING: SPOILERS AND DISCUSSION OF TRIGGERS AND SAFETY***

SATAN'S MISTRESS is a bodice-ripper and features a medley of triggers. The ones that come immediately to mind are: gang-rape, rape, orgies, substance abuse, black masses, gaslighting, and child sexual abuse. I may be forgetting some more but those are the ones I distinctly recall. The heroine, Fiona, works as a milliner and suffers from a common historical problem: Being Hot While Poor. Since she has basically no rights, she's foisted like chattel from family to abuser to family to abuser like vicious cycle clockwork. She thinks life is pretty sweet when a duchess takes her on as a maid, only to have her husband attempt to rape her and then be drugged and recruited for a gang rape for a black mass at the Hellfire Club (which was a real thing, by the way). It's implied that this happened because the duchess was jealous that Viscount Huxley, #1 babe, had an eye for Fiona.

Despite all this craziness, the book was incredibly boring. There were some dude, WTF moments and then there were just long endless passages of waiting for more WTF things to happen. The book is heavy on the purple prose but not badly written and it seemed relatively well-researched. This is one of those romance novels that doesn't feel like a romance novel, though, because there is just so little connection between Fiona and Huxley (or any of the men), and she just reads as kind of emotionally disconnected and damaged (which makes sense). I just didn't see things working out between Fiona and Huxley because he treats her like a total whore after her rape, assuming she must have wanted it, and when he finds out she was drugged (after she saves his sister-- and first, she has to convince him that she isn't lying because he assumes she's made the whole thing up to fuck with him) he's just like "oh whoops, I thought you were just some greedy slut" almost in those exact terms (except, you know, more Georgian-y in tone). Meanwhile, I'm just sitting here, like, ARE YOU KIDDING ME, MY DUDE.

If ever there were a man who should have, could have groveled, this is him.

I'm giving this 2.5 stars because it was balls-deep in bat-shit insanity but I would not reread or recommend.