Strangers on a Train by Patricia Highsmith 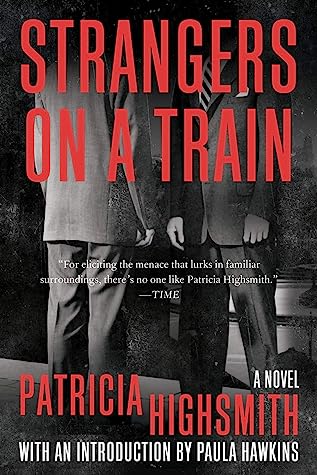 STRANGERS ON A TRAIN has been on my list forEVER so when I found out that I could get an ARC of a new edition, I was like, hmm, let me think, um yes please! Because I am one of those unbearable people who refuses to watch film adaptions of things until I have read the book thing, so now I can watch the movie version of the thing!

Rife with m/m subtext and dramatic tension, STRANGERS ON A TRAIN is the tale of a Faustian bargain conducted between strangers with all the casualty of a handshake. Imagine you're on a train minding your own business, an individual struggling to obtain a divorce with your cheating pregnant spouse who's all like, "Okay, babe, we can get the divorce but only if you stay with me until I have the kid because I want the protection and I can ruin you, haw haw haw." You're not in a very good mood. You need this job. And then you meet this drunken but cold-eyed individual who gives off desperation and ruthlessness in equal vibes and you have one of those weirdo-sitting-next-to-you-on-public-transit conversations and he's just bought you dinner and suddenly he's like, "Hey, wouldn't it be cool if someone murdered your spouse for you and oh, by the way, murder my father."

Originally, I was super into the beginning of the book. It's tautly written and suspensefully plotted, and even though literally everyone in this book is awful, the hero, Guy (the every-guy?), is relatable in his selfishness and his paranoia. Bruno, the stranger, is also compelling. At times, he is magnetic. At other times, he's about to fall apart. Neither of these guys is a mastermind, so you know there's no way their plan is going to work out-- if they even put it into action! Will they? Won't they? Dun, dun, dun. But the end of the book kind of fell flat for me. I actually had the same issue with THE PRICE OF SALT, which also took forever to get where it was going in a classic case of Last-Actitis and ended in a way that kind of felt haphazardly tacked on. The only book by this author that I have truly loved so far (and need desperately to reread) was THE TALENTED MR. RIPLEY. But this one is ok and I think it gives context for the movies, both of which took some pretty significant liberties with the plot, iirc.