Dig Your Grave by Avril Ashton 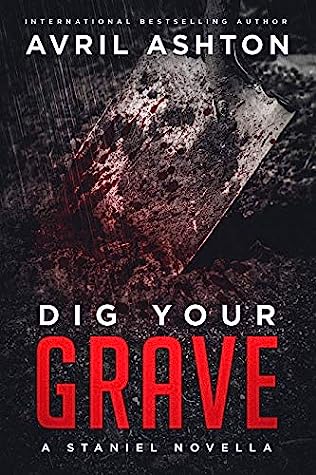 This was my first buddy read with the amazing Julia, so make sure you check out her review! I was super psyched to read DIG YOUR GRAVE because the first book in the series, CALL THE CORONER, ended up being an unexpected fave despite the violence and dysfunctional romance. Sequels that follow a couple actually getting together are always hard, and I was interested to see how Ashton kept things fresh between Daniel and Stavros in this new book.

But... I actually wasn't that into it.

First, the violence in this book seems to have been upped by a lot. It pushed the limits of what I'm comfortable with personally, and I think anyone who doesn't enjoy reading about gore and torture should avoid this book. It doesn't shy away from graphic detail. I said in my review of CTC that the first half of the book was torture porn and the second half was an enemies to lovers romance. This was... mostly violence. And there wasn't much of a plot except for the torture stuff and Daniel and Stavros each taking a turn rescuing the other from... torture stuff.

Second, I'm not really sure how the romance between these characters has progressed or that they've really developed as people. The attraction between them still seems to largely hinge on physical elements and a mutual love of fucking people up. And watching two guys just lusting after each other and getting off on watching their partner cut guys up with saws just... doesn't do it for me. On multiple levels. I guess it's realistic that these guys (who are older-- in their 40s and 50s, I believe) are largely set in their ways, so their romance might be less fluid than a couple that was younger and still developing emotionally, but it wasn't all that enjoyable for me to read against that tapestry of violence.

If you like really dark books-- I know some people enjoy being shocked, which is why splatterpunk is a thing-- this will be a great fit for you. Sometimes books sugarcoat the lives of the people they're about; I totally believe that these two dudes are awful cartel goons who revel in their violent lifestyle. And I've found out that this really isn't for me, but maybe it will be for you.

Side note: the author seems to have changed her writing style a bit. It flowed much more in here, I noticed: there wasn't as much of that telegraphic writing style I noticed from the first book and she didn't have as much word repetition. So even though the story wasn't as interesting to me, it does seem like her writing style is becoming more polished with subsequent books. I'll probably check out more from her soon-- but I think I'm done with this particular series.