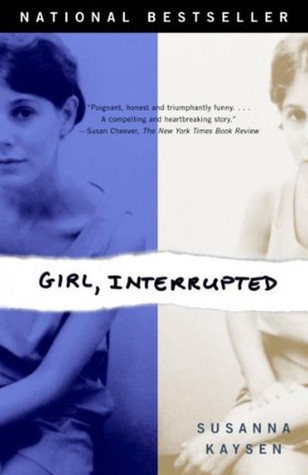 GIRL, INTERRUPTED is basically required reading for psychology majors. I've read this book about five or six times and I've seen the movie a handful of times. I actually don't like the movie-- it's a good drama, but from a clinical perspective (that's clinical in the pedantic sense and not the medical sense, BTW), I feel like the movie is mental illness tourism that sensationalizes psychiatric disorders for fun and profit.

The book, while hard to read, is very good. Susanna Kaysen is brutally honest about her stint spent in a psychiatric clinic. I think she also does a pretty good job trying to balance writing about what it was like being there, in the moment, and her attempt at an objective postmortem where she attempts to analyze her diagnoses at a distance. Mental health exists on a continuum and part of what turns a habit or behavior into a symptom is pervasiveness and distress. It's a large part of the reason for the stigma, I think: the line feels uncomfortably thin. One day, you're compulsively scratching at an itch on your skull. The next, you're on anxiety medication for trichotillomania.

Kaysen at one point describes mental illness as a kind of schism between reality and one's own perceived mental states. There's an incredible metaphor in here where she gives the example of the senses looking at a bureau but the brain perceiving and responding to a tiger. Her own diagnosis was for Borderline Personality Disorder, and I always found it interesting how different it feels to read about a real human with the disorder on paper than a bunch of cold, impersonal symptoms that you're supposed to memorize when cramming for a final. I honestly think that's part of the reason why so many of my professors forced us to read so many of these memoirs: it's important to remember that mental health disorders have a human face, and that to validate those who suffer from these conditions as individuals who are worth more than the sum of their neuroses and deserve to be treated with dignity.

The movie kind of failed with that, IMO. It feels kind of like a Lifetime movie with a bigger budget. I'll admit that I used to really like the movie but it always made me feel vaguely uncomfortable and when I read the book and met the real characters who were the inspo for the film adaptation, it made me realize that the movie itself was kind of a schism from reality. Like someone read the book and played a game of telephone and ended up with something surreally similar, but holistically different. I enjoyed reading about the other inpatients through Kaysen's eyes. She's surprisingly non-judgemental in her assessments of their personalities and actions. Lisa fascinated me as a young reader; as an adult one she scares me. Polly and Georgina were the most interesting and sympathetic, although I felt sorry for Daisy.

If you like reading memoirs about mental health, or gloomy literary fiction aimed at subdued young women, you will enjoy this book.