Love Is For Losers by Wibke Brueggemann 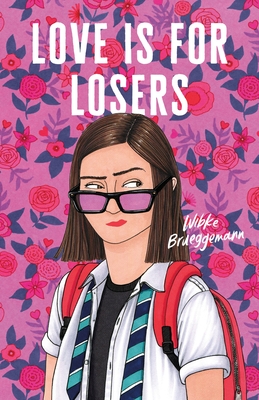 Because the title is LOVE IS FOR LOSERS, I originally thought that this was going to be a story about an aro/ace girl. Instead, this is a young adult story, told epistolary style, about a depressed misanthrope who hasn't quite figured out that she's a girl who likes girls.

There is so much to appreciate about this book but I think it's probably going to put a lot of people off because the heroine, Phoebe, is so angry. Ironically, that's what made me relate to her so strongly as a character. When I was fifteen, I was very unhappy, very miserable, and very jaded. My thoughts weren't always nice, colored by a bitterness that stemmed from my own sense of inadequacy. And Phoebe is working through a lot of issues: she's conflicted about what she wants out of life, her best friend has just dumped her for a boy, and her mother is often absent because she works for a program that's like Doctors Without Borders that often puts her in war zones or developing nations.

Lest you think that LOVE IS FOR LOSERS is a sad sort of book, though, it isn't. Even though abandonment, depression, and grief are explored, there's also all sorts of delightful things in this book. Things like thrift stores, cats and kittens, first love, positive female role models, female friendships, personal growth, and a pretty accurate look at the world from a teen's eyes. I'll understand why some people might be put off by Phoebe as a character, and if she had been handled less competently I might have ended up putting the book down, but I like she grew as a person over the novel and began to develop a sense of empathy from the coaching of her friends and family. She even begins to adjust her behavior and slowly learns to be more forgiving and accepting of others.

This book has been compared to Louise Rennison's Georgia Nicholson series and I could sort of see that, but it's less breezy and Phoebe is much more sarcastic and introverted than Georgia. That said, if you're into books set in the UK and like that sort of diary format of storytelling, I think you'll really enjoy this book! It's been a while since I read a contemporary YA that I enjoyed as much as this one.