The Protégé by Brianna Hale 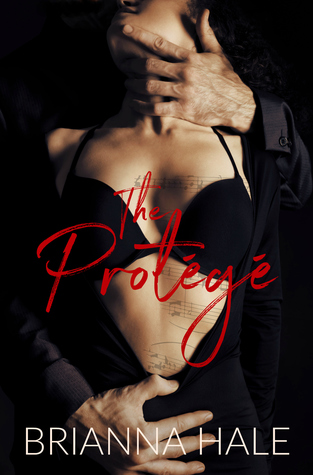 I'd been following the author's teasers for this book eagerly on Twitter and was delighted when she offered me an ARC. I started reading it a month ago...and then put it on hold and basically forgot about it, because it was so, so different from the other two books by Hale that I'd read and loved, and not in a good way.

THE PROTEGE is a romance between a cellist (Isabeau) and a conductor (Laszlo). Laszlo happens upon Isabeau when she's just eight-years-old, playing a cello as large as she is for money in the bad part of London. Disgusted, he follows her home and learns that her mother is dead and her father is a heroin addict. After a cursory discussion with her fried-out pops, Laszlo decides to make Isabeau his "ward," a title that he maintains until her eighteenth birthday, when she tries to put the moves on him and he pushes her away, until they meet again three years later.

OK, so there are some things I really enjoyed about this book. The writing is lovely, as it was in the other two books I've read by this author, and so is her clear passion for the arts. SOFT LIMITS was about opera and literature, both things I love, but THE PROTEGE is all about the beauty of classical music, and as someone who was in a symphonic band for over a decade, I loved this aspect of the book: all those old composers made my fingers itch for an instrument to play upon, to feel the music move through and around me. It was so nostalgic.

There are really three problems I have with this book and they were severe enough that they kept me from enjoying the story as I wished I would.

Problem #1: The nature of the relationship between Laszlo and Isabeau. First, a disclaimer. I'm OK with large age gaps and I'm OK with guardian/ward romances (in fact, I'm a sucker for them in regency romances, particularly Georgette Heyer's REGENCY BUCK). What I am not OK with is romances that start out with a parental figure falling in love with their child. This just feels like all kinds of gross to me, and such a breach of trust. It's like falling in love with and having sex with a student, or a step-child. Even though they're not your flesh and blood, even if you wait until they're legal, it's a violation of the role you are supposed to serve to said child. I can stomach depictions of this nature only if they are not romanticized (as in WHITE OLEANDER or INNOCENT), but as soon as the relationship is touted as some sort of HEA, I find myself unable to resolve my feelings of cognitive dissonance with the storyline - especially here, where Laszlo was fantasizing about her while she was still underage and Isabeau was reciprocating those feelings, and when they found out, they talked about this as if it were lost time. Um, no - it doesn't matter if it was consensual or that you weaseled your way around the illegality of such a relationship by not officially adopting her, you were effectively her parent and you were sexualizing her and keeping her from enjoying normal relationships by guarding her the way a dragon does its hoard while she was still underage.

Problem #2: I didn't dig the sex scenes in this book as much as I did SOFT LIMITS and MIDNIGHT HUNTER. SOFT LIMITS was daddy-kink with sadomasochism and MIDNIGHT had BDSM undertones with a Stockholm Syndrome-like captivity plotline. However, both the h and the H in those stories had so much passion and feeling for one another, and it just made the pages fly by because I was invested in what happened to them and whether they would be together (MIDNIGHT HUNTER actually had me white-knuckling my laptop). Isabeau and Laszlo were much more nebulous and this book felt more like it was just about sex for these characters. Sex and music. Laszlo always seemed to be much more interested in Isabeau first as a fount of talent and then as the object of his desires than he was for her as a person, and Isabeau was just caught in his thrall from the beginning and had no personality of her own. This book felt much more like an awkward debut, and less like a novel by an established writer, whose works I normally love, and I was sad about that.

Problem #3: Laszlo. He just came off as such a skeevy hypocrite and a bit of a pervert. It's funny, I was thinking how this story reminded me of Woody Allen and then in the storyline, he's literally fretting about becoming "the Woody Allen of the classical music world," and I'm just sitting here thinking, "Well, duh. She's basically your adoptive daughter." And also she was underage. Did I mention that? It's always worrying when your Byronic romance hero feels more like Humbert Humbert than Edward Rochester, but watching him pant over his underage ward and try to hide his feelings like a mastubator sneaking out of a pornographic theater just made me feel fifty different shades of #gross. I wanted to like him but it was impossible to, and that's something else I'm super upset about, as both Frederic and Reinhardt from her other two books made my all-time favorite heroes lists, but not Laszlo. Nope, nope, nope.

Hopefully I'll like this author's next works better. She has a lot of talent and I love how thoroughly she researches her settings and trappings for her novellas. This one in particular was just a total miss for me.

I was provided a copy of this book from the author in exchange for a fair and honest review.