Prince of the Night by Jasmine Cresswell 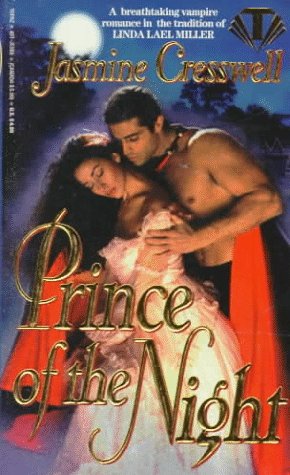 💙 I read this for the Unapologetic Romance Readers' New Years 2018 Reading Challenge, for the category of: Paranormal Romance. For more info on this challenge, click here. 💙

Look at that cover - oh my God, the pose, the costumes, the cheese. This is what I live for, as a reviewer of vintage romance novels. Bad romance covers are a key part of the Old Skool Experience™. That said, once I got over the low resolution Photoshop job and what is either a B-movie vampire wearing a Target Halloween costume or an innovative male stripper wearing a pair of armpit tassels, I noticed the small blurb at the top that said, "A breathtaking vampire romance in the tradition of LINDA LAEL MILLER." Once I stopped giggling over the (I'm assuming) unintentional pun of "breathtaking" to refer to a vampire romance, I was like, "Wait, why does Linda Lael Miller sound so familiar?"

...Oh wait, I remember. She's that lady who wrote FOREVER AND THE NIGHT: the romance novel that has the dubious honor of being one of the worst vampire novels I ever read, due to "Anglo-Saxon" sex words, eyelid-licking, and Nazi costumes.

And this book is written "in the tradition" of... that.

To PRINCE OF THE NIGHT's credit, it isn't quite that cringe-worthy, but it's still pretty bad. What makes this sad, is that the book actually has a really great start. Cordelia is an upstanding young English miss. She's escorting her pregnant cousin, Mary, and her maid Ellen, to this reclusive Italian estate called the Three Fountains - allegedly a long-forgotten home owned by her father. When she gets there, she's shocked to find out that the estate - which is really more of a sprawling mansion - already has an owner, the Count of Albion.

Right away, things are super suspicious. There are several murders, which may or may not have to do with the Second Italian War of Independence; the Count has a number of young boys as servants, avoids being in their company, won't eat the food, and makes a creepy comment about Cordelia being a virgin; and, oh yes, the two Austrian soldiers who escorted Mary and Cordelia to the castle from the inn seem super suspicious of everyone - especially Cordelia - and nobody takes her suspicious seriously, except for the Count's sinister and elderly maid.

As I said, the beginning is great, and has that claustrophobic, gothic vibe I've grown to love, and pays a brilliant homage to the original Dracula novel written by Bram Stoker. All that changes when Cordelia finally acknowledges her attraction to Dakon (Count Albion), which in my opinion happens much too quickly, and things start getting weird as Jasmine Cresswell starts playing around with the vampire mythology in order to make it her own.

First of all, the vampires in this world come from outer-space. That's right. They are aliens.

Second of all, they can only impregnate virgins.

"It's true, then? The count must drink human blood in order to live?"
"Only at ... certain times," Anna said. "For years he has tried to make do with the blood of young boys, but there is no substitute for the blood of a female virgin where my master is concerned."
"The blood of men and women is the same - "
"No, signorina, it cannot be, and the blood of virgins seems more potent than any other. His people have discovered that they can only produce offspring if their female partners are virgin" (250).

Third of all, all vampire offspring created with humans are male because the coupling is so violent.

"It seems so strange. In your own world, girls must presumably have been born in equal numbers with boys, so what is it about joining with human females that causes only boys to be born?"
For a moment, Dakon didn't respond. "Our scientists have concluded that the violence inherent in the act of mating with a human determines that the offspring of the union will always be male," he said. His voice was harsh, and he obviously disliked reminding her of the brutal reality of his nature (302).

Vampires apparently go through this mating frenzy where they lose control to the point of rape. They can also kill by tearing the throat of the person they're mating with. So how do you get a girl?

"Perhaps they have not examined the situation from the correct point of view," Cordelia said. "But it seems to me that if you insure that the mating between a Vam-pyr and a human female is not violent, then the child resulting from that union will be a girl" (302).

So, need a boy child? Use your human wife ill. Need a girl child? Love her tender.

You know what makes this even more disturbing, though? When Dakon and Cordelia (inevitably) have a child - and of course it's a girl - and show her to her vampire grandfather, he's shocked.

ZArymp (lol) shook his head in bewilderment. "Vampire babies are always boys. For four thousand years, no Vam-pyr has ever fathered a female child" (377).

What the flipping-frick. That's got terrifying implications. For FOUR THOUSAND YEARS, vampires have been gleefully and violently ill-using humans, and nobody took a moment to stop and think, "Hmm, maybe we should be subverting the violence that's inherent in the system?" Nobody?

The sex scenes are all pretty terrible, too. Vampires were, historically, an interesting and "safe" allegory of earthly sexuality without totally offending Victorian sensibilities. Cresswell really takes the phallic imagery of a vampire's fangs and runs with it.