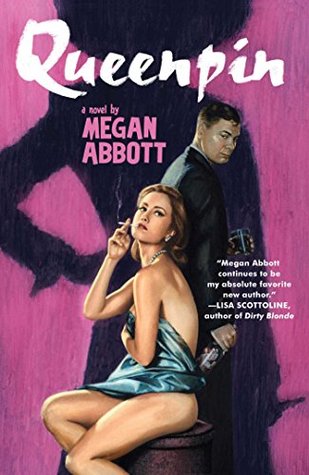 It didn't hit me until the very end of the book that our heroine was never even given a name. That's because she rules the narrative with her forceful, first-person account of how she went from a pencil-pushing, sweater-wearing 9-to-5er to a "queenpin." I've only read Abbott's young adult novels before this one and one of the things, okay, two of the things, that I've always liked about them are the fiercely intense, fiercely rivalrous homoerotic relationships between her female heroines, and the fact that she lets them be bad people if she wants, without judgement.

I don't usually like crime noir fiction because I feel like a lot of it is very misogynistic. And yeah, you might be thinking, "But wait, Nenia, you read bodice-rippers, you of all people shouldn't be talking about misogynistic." It's true that bodice-rippers sometimes carry an internalized misogyny of their own class, but it's penned by women, from a woman's gaze. It's an entirely different sort of misogyny than the "breasted-boobily" variety, where the heroine is constantly written from the male gaze, even as she's looking at herself in the bathroom mirror, and every "strong" heroine must be given a history of (usually sexual) abuse, and all of the men toss off bigoted one-liners while getting called "smooth" and "tough" in reviews.

Awful things happen to our plucky unnamed heroine and the woman who takes her under her marabou boa-wearing wing. They do awful things to other people. But both of them are full of agency, and I can't tell you how satisfying it was to see these women doing the things that men do, and taking advantage of that sexism to, in some cases literally, get away with murder. QUEENPIN is literally a Lana Del Rey song come to life, and if the idea of that appeals to you, put on Ultraviolence, plug in your ear buds, and just bask in the truly F'd up glory that is QUEENPIN.

Here's looking at you, kid.