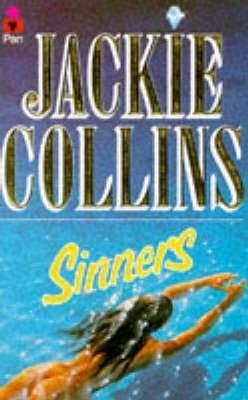 I'm currently in the process of cleaning out my Kindle and I have a whole bunch of vintage goodies on there that I snagged for free when they were first being released on Kindle. Jackie Collins was for the 70s and 80s what trashy new adult erotica authors are for the here and now. She would write smutty, unapologetically trashy books about trash human beings and people would buy that trash and thank her, and she in turn would thank them by writing more.

I did not like this book as much as LUCKY because it feels much more dated and there's a lot more content that would be considered bigoted today (e.g. homophobic and racial slurs, especially). For example, one of the guys in this book (not a villain) nicknames his Mexican girlfriend "Enchilada," and antiquated names for black people are casually thrown around by several of the characters (whereas in LUCKY, only bad guys use them). I also did not like how heavily abuse, rape, and misogyny were used for shock in the various plotlines. Many of these plotlines were mirrored in LUCKY, but since this is a shorter book, and there's more people doing these things, it feels much more icky and noticeable as a result.

Sunday is an emerging starlet who gets her first taste of fame when she tells off her sexist producer and seeks her own way. There's also Charlie, a famous has-been. Branch, a gay-for-pay guy who ends up being this aging psychic's live-in lover. Dindi, another aspiring actress who trades sex for movie roles. Claude, a jaded and sociopathic French actor-producer. And the most disgusting character of all: Herbert, a man who writes actresses dirty letters before mailing them out with baggies filled with ejaculate. He's the main villain of this story, and he is one of the creepiest characters I've encountered outside of a book about serial killers. We follow Sunday on her journey to balance her principles with her lovelife, while dealing with people whose careers all have hyphens and who participate in everything from sex cults to acid trips in the desert. So you know, your normal Friday night, I guess.

I sped through this because it is trash and I love trash, especially if it is Jackie Collins trash. A lot of what I read upset me, but I was also entertained and I didn't put the book down (even if I wondered if perhaps I probably should have). If you have triggers, this is not a safe book for you, as it violates pretty much every comfort zone out there (including animal deaths). That said, if you find yourself hankering for an outmoded piece of fluff that is un-PC in every possible way, look no further.