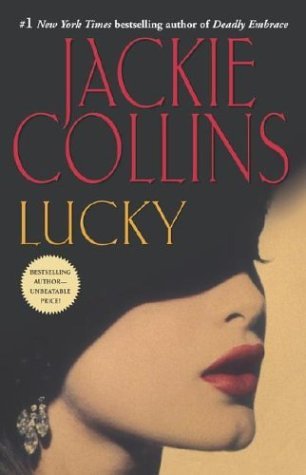 I think Jackie Collins ranks up there with Tarryn Fisher and Rosemary Rogers in the Hierarchy of Smutty Trash™. These are desert island books, to be sure. I know, I know, everyone says they'd bring Dickens or Baudelaire, but I know who I am and I'm not trying to impress anyone. I love the simple pleasures in life and if you keep me in bad smut, good wine, and great company, I'm happy. So bring on that desert island, and I'm bringing my Jackie.

LUCKY is such an epic wtfest of laudable proportions. If I had to describe it with two words, it would be "80s sleaze." Everyone plays musical beds, everyone does cocaine, everyone teases their hair, Madonna is still the sex symbol, and stretchy synthetic fabrics are in (the stretchier, the better, and bonus points for leopard print).

The characters are even better than the setting, though. Lucky, the titular character, is the daughter of an ex-mobster millionaire playboy who wants to make her own way in the world. She talks dirty and doesn't take any guff from anyone, and despite some of the lurid content in this book, she's basically a total feminist and has a raging comeback for every misogynistic comment hurled her way. The secondary characters are also great. There's her playboy pops, obviously: Gino. Then there's Olympia, the high-strung, slightly overweight heiress who puts the erotic in neurotic. There's Santino, the sadistic mobster. Eden, the hooker with the heart of gold-plated sulfur. Carrie, the reformed hooker with the lawyer son in the middle of an existential crisis. Lennie, the actor-comedian who just wants to find love. Dimitri, the aging billionaire with the high-maintenance French mistress. Brigette, the precocious and annoying child who grows up to be a precocious and annoying sex kitten. And Jess, the good girl in love with the bad boy (who just doesn't know it yet). And Matt, the bad boy who is in love with the good girl and doesn't think he's good enough (it's actually really adorable).

This is a long story, one of those epic sagas that were so popular in the 70s and 80s and then fell out of fashion in the 90s, which makes me sad because nothing makes me happier than finding a really thick and juicy story that you can bite into and savor like a steak. A longer page count, when done well, can really let you become attached to the characters, and by the end of the book you almost don't want to say goodbye to them. That's how I felt with this book. Even though the drama was so over the top that it was pure ridiculousness, it felt just real enough that I thought to myself, "Well, someone's probably done it." I read the Wiki on Jackie Collins and allegedly she drew inspiration from her own life for her books, which, okay - so do all writers. But Jackie Collins is the younger sister of actress Joan Collins, so I have no trouble believing that this teased and rhinestoned queen has rubbed elbows with the rich and famous and lived to tell about it. In fact, I want to believe it, because it makes these characters even more outrageous. Adultery, blackmail, domestic violence, drug addiction, murder, mob hits, kidnapping, inheritance battles, and scandal are all tropes involved in this messy soap opera. The last 100 pages are especially intense and had me sitting up in bed, saying (quietly, in a "whisper-yell" because everyone was asleep), "WHAT?"

If you enjoy fun, trashy books and long, interesting storylines that feature a colorful and large cast of characters, I really think you should give Jackie Collins a try. This is my second book by her and she's just so fun. I always end up fangirling after I finish one of her books. Right now, I'm reading SINNERS and it looks like more of the same: smut, vice, and romance. What more can you ask for?