I'm honestly shocked that this has practically no negative reviews because I personally thought it was pretty awful. If reading this book has taught me anything, it's that I'm a glutton for punishment when it comes to reading over-hyped young adult novels, and I should probably change my blog name to "I hate everything you love." Will I learn my lesson? No. But at least I can admit it.

A THOUSAND PERFECT NOTES is the story of Beck, an abused boy who plays the piano and hates it - although he hates his mother more. His mother is probably the most grotesque caricature of an abusive parent that I've read recently; she has all the nuance of a cardboard cut-out villain, and the physical scenes of abuse towards him and his young sister are so graphic and numerous - especially towards the end - that it feels like it's done more for shock value than any sort of narrative purpose. It was excessive and tasteless and left me feeling a little sick.

One day, Beck's snarky, only-hasn't-been-fired-because-he-probably-has-tenure-and-knows-where-all-the-bodies-are-buried teacher assigns a quirky assignment where students are forced to pair off, interview each other about a religious or moral issue, and then write about the other's side. (I can almost hear the parental phone calls.) Beck is paired off with a manic pixie dreamgirl named August, who doesn't wear shoes and cuts class to buy cake, and draws all over herself with sharpie while talking about how she just wants to "be alive." She's so annoying. I hated her instantly. I hated how violent she was, and how this was supposed to be cute (it's described as kitten-like at one point). Especially since Beck's mother was also physical and this was definitely portrayed as a bad thing. I felt like that was a really bad decision on the author's part, because it seems to be saying that using violence as a solution is OK if it's for a good cause. But I'm sure Beck's mother saw what she was doing as a "good cause," so why is kicking people in the bathroom for hurting animals OK, but punching people for playing piano badly not? Is it that August is less effective in meting out her forms of violence? Is it because she's young and cute and pretty and harmless?

Obviously the two of them are love interests, and August doesn't really have any agency beyond thinking of quirky things to open Beck's eyes to the joys of life and inspire him, etc. etc. etc. They're actually quite rude to one another in the beginning, trading grade school insults and being garbage humans to one another. August is like a pitbull and just won't leave him alone, invasive in a way that would be rather scary if the gender-roles were reversed. And Beck wallows in misanthropy that I tried to tell myself was probably caused by the abuse, but comes off as really annoying and judgey at times. Meanwhile, this fluffy, quirky love story is juxtaposed against the cruel landscape of physical and emotional abuse, and Beck doing things like fantasizing about chopping off his own hands so he won't have to play music anymore but also skipping class to go buy hippie cake with his pixie girlfriend. What the hell? The book is told in an annoyingly precious narrative style that does not fit the content of the story at all and makes the characters (who I think are supposed to be high school age) sound more like middle-grade characters who speak in some of the most contrived and unrealistic dialogue I've encountered in a while. Seriously, who, apart from an aging starlet (who's probably either Zsa Zsa Gabor or Joan Collins) says divine and scrumptious every other word?

I feel like this book wanted to be Akemi Bowman's STARFISH and Jerry Spinelli's STARGIRL, but couldn't decide which to be, and so decided to settle for both. I liked both those books individually, but in an X meets Y blending of the two - at least in this embodiment - it really doesn't work out. I did think that Drews did a better job of humanizing the abuser in this book and showing moments of jarring normality in between the abuse where not being abusive feels like a "reward" or "kindness" than STARFISH did, but STARFISH did a better job with writing realistic characters who, while unlikable, are at least relatable and sympathetic. And while Jerry Spinelli's STARGIRL was also a manic pixie dreamgirl, at least she had agency beyond saving some rude and sad-eyed boy by skipping along gutters and wearing ribbons in her hair. Maybe this book tried to tackle too much. Maybe I'm just too old and prickly. Either way, I did not like this book.

P.S. I drew the characters as cakes: 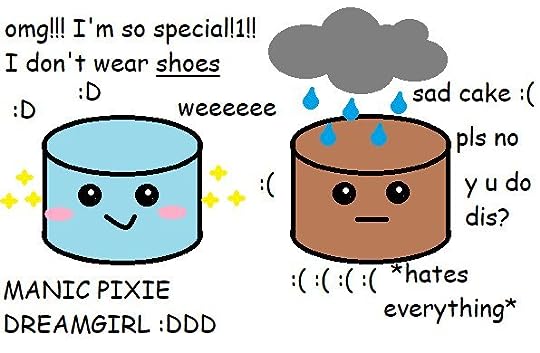