The Castle by Skye Warren 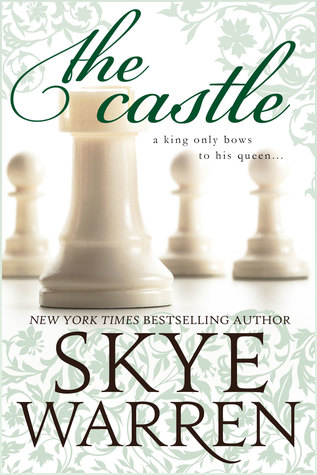 As a chess-player and a smut queen, there was no way I couldn't buy this series. I mean, it combines two things that I love in a weird and unexpected way - like a peanut butter and pickle sandwich (no, okay, this is actually a thing and you should try it). THE PAWN, the first book in the series, lived up to my smutty expectations with its "dangerous" hero, virginity auction, revenge subplots, and utterly depraved cast of characters. THE KNIGHT was a step-down because it lacked the things that made THE PAWN so much fun. No more racy auctions, only lots of angst about whether or not the hero loves her, and a bizarre criminal underground subplot that showed no hint of going away.

THE CASTLE takes all of the weird subplots from the two previous books and just runs with them - and I mean runs with them. At breakneck speed. Probably while nude, with a half-drunk bottle of tequila in the other hand. This book is freaking insane, and not in the good, bodice-ripper way, but in an "Oh my God, what is even happening right now?" way. The criminal underground subplot culminates in a hit being put out on the heroine, Avery, who spends the whole book angsting over her love for Gabriel and whether it will destroy one or both of them, and she starts to hear the same voices that drove her mother mad, so there's also a bit of, "What is sanity? Am I insane, too?" going on, as well.

And then there's that twist. Wow, I have no words. That's all kinds of messed up.

You know, now that I'm sitting here mentally cataloguing all the messed up books I have read, I think I've found the perfect comparison to Skye Warren's Endgame series. Andrew Neiderman. Andrew Neiderman was the writer who took over for V.C. Andrews (of Flowers in the Attic fame) after she died. You can totally tell the difference, too. Andrews had a sort of poetry to her writing, and Neiderman tried to keep it up for a while, continuing the 4- to 5-book-long family sagas that were Andrews's claim to fame, but then the estate seemed to give him what was basically free reign and he started turning out all these really bizarre, borderline smutty stories that were off-the-wall crazy. That's how I feel about Endgame. The first book was like OG V.C. Andrews, the second book was like that transitional phase when he was still trying, and the third book, this book, is unbridled Andrew Neiderman shouting, "YOLO!" while writing the YA equivalent of a bodice-ripper (which is what I adore him for, in his own way, but he is definitely not V.C. Andrews-caliber). (Comparisons of YA aside, I feel obligated to issue a disclaimer that this book is not YA and deals with virtually every unsavory topic you can imagine (sometimes graphically).)

I'm really grateful for my friend who loaned me this book for my Kindle so I could see how the series ended. It was just as weird and OTT as she promised, so at the very least you can say that this book will deliver your full quota of WTFery for the day (especially if you're short on vitamin WTF already.) Now let's break out the peanut butter and pickles, shall we?