The Lords of Darkness by Tanith Lee 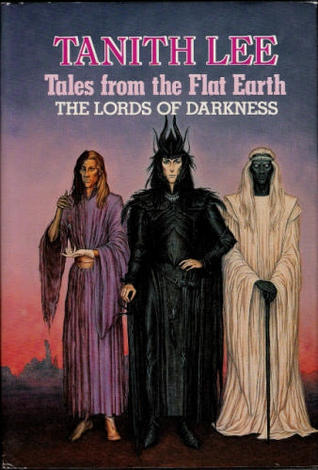 Three months of reading. That's how long it took me to work my way through this imposing omnibus of the first three books in the Flat Earth series. I've been really bad at finishing books lately, but it really helped that my friend Elena volunteered to buddy-read these with me, as I've had this tome on my shelf for years and never quite managed to have done with it.

This is a dark fantasy series for adults that has a mythological element to it. It's set on an ancient world where the earth was still flat (hence the title), and gods and demigods still wandered across its surface looking for mortals to screw with (sometimes figuratively, sometimes literally). This anthology consists of the first three books in the series, written about the "lords of darkness" represented in each distinct book: Azhrarn, lord of darkness; Uhlume, lord of death; and Chuz, lord of madness.

One thing I love about this anthology collection is the gorgeous illustrations on the cover. It shows Chuz, Azhrarn, and Uhlume, respectively, and I thought the artist did a really great job representing the characters the way I imagined them in my head. It doesn't hurt that Azhrarn looks a little bit like David Bowie with his piercing eyes, hawkish nose, and chiseled jawline, because for much of NIGHT'S MASTER, I was picturing him as Jareth from Labyrinth.

So without further ado, let's dive into each book.

Obviously my favorite. Similarities to Jareth aside, this was just a really great story with great writing and seamless blending of each of the distinct fables as they wove themselves into an equally distinct whole. I loved each story in here, and thought it portrayed the fickle nature of gods really well.

I thought Uhlume, the god of death, was an interesting character and there were some great side-stories in here. Notably, there is a gender-fluid character who ends up becoming a flawed hero figure of the story. Some of the characters were great, but others were tedious, and towards the end I actually set the book down a couple times because the story was starting to drag. It's also the longest of the three (by about two hundred pages), which makes the slow pace even more notable.

Chuz is super creepy! I liked this story second best and almost gave it four stars because of the ending (it has the best ending of the three). However, like DEATH'S MASTER, I felt that DELUSION'S MASTER also had some really slow parts and some of the stories were a little too close to events that happened in the previous two books. There's also a story in here that I know is going to upset people, in which the rape of a developmentally disabled girl is "redeemed."

Overall, I did enjoy these stories and the creativity that went into them. A lot of the fantasy books coming out lately have been marketed with a heavy hand, while at the same time delivering chronically underwhelming and derivative stories. Lee, at least, remains authentic to herself, and doesn't appear to be afraid of causing offense. She's one of my favorite authors and I will read anything she writes, so if you're looking for something shocking and different, check her out.