This Other Eden by Marilyn Harris 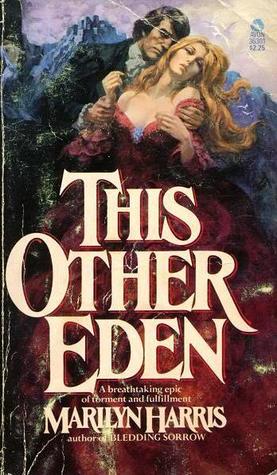 🌟 I read this for the Yule Bingo Challenge, for the category of Voldemort: book w/ a villain. For more info on this challenge, click here. 🌟

Books like this are why I read bodice rippers. Okay, some of them are bad, and reading them is a meta-experience tantamount to MST3K, where the bulk of the enjoyment is making fun of what a festering pile of fail they are. But on the other hand, some of these vintage delights are genuinely good, on their own merit, and while cheesy and oftentimes un-PC, they tell a damn good story.

THIS OTHER EDEN was recently rereleased for Kindle via Endeavour Press, and so was its sequel, THE PRINCE OF EDEN. THE EDEN PASSION is to be released shortly after - and I know this, because I was lucky enough to receive a FREE copy of the third book in this series for review. You know what that means - a reread of the first book, and a gleeful binge of the second, before dive-bombing into the third. Romance novels are like potato chips: you don't consume just one. YOU EAT THEM ALL. ...Or, failing that, you eat as many as you can before someone rips the bag from you.

THIS OTHER EDEN is set in Georgian England. It opens with the public whipping of a sixteen-year-old girl named Marianne Locke. She's being punished for disobedience to Lord Eden - there are many reasons behind this "disobedience": she witnessed the illegal operations he's holding in his cellar, was too proud for her station, and most bitterly, she dared to refuse his advances. Marianne waits for her fate in a charnel pit, which is where people throw the corpses of dead animals and dead human beings post-slaughter, before being hauled out of that stinking cesspit for public flagellation.

Obviously, this punishment traumatizes her on a mental and physical level, so she's sent to live with her half-sister, Jane. Jane resents her younger sister because she was always the favorite, and sees this as the perfect chance for revenge. She has her sister live in the pantry (and then later a servant's bedroom) and has her perform all the duties of a servant for her and her common law husband. Unfortunately the husband quickly falls for Marianne, and this creates tension. And yet - it's a weird tension, because even though things between Jane and Marianne are tense, they never really seem to overtly hate one another and resort to things like murder, the way characters do in Bertrice Small novels. That's a subtlety that really makes THIS OTHER EDEN stand out: all the characters are complex and none of them are purely good or purely bad.

For example, even though Jane softens towards her sister, she's still quick to sell her out to Lord Eden multiple times whenever she needs the money. And Eden is only too happy to take this blood money. He spends about 80% of the book, plotting and scheming to find ways to get Marianne into bed. (And not just any bed, at one point he attempts the use of a Celestial Bed, which is a very real and ridiculous thing.) At first it's a matter of domination and pride, but then he actually starts to love her - but unfortunately, he realizes he loves her only after he screws up, and at that point he is literally willing to give her anything, even the literal skin off his own back, to have her.

This is a gloomy Gothic behemoth that is the perfect example of the evolving romance genre, when the Gothics of the 60s and 70s began to yield to the infamous bodice rippers of the early 80s. It pulls off both roles with finesse: gloomy castles, smuggling operations, scammy sexologists, muddling and sinister relatives, rape, murder attempts, dens of iniquity, superstitious townsfolk, the French revolution, and so much more. But THIS OTHER EDEN goes one step further, with a hero who is truly selfish and childish, and a heroine who is opportunistic and self-absorbed. This is less a romance than an intricate (and intimate) character study of two truly terrible people who gradually overcome their flaws, as well as a realistic portrayal of class and the entitlement of divine right, and how a character might realistically go about overcoming that for the sake of love.

On my first reading of this book, I gave it 3 stars. I'm not sure what 2013 me was thinking, because this book is really, really good. The lush and vibrant writing alone is worth an extra star. Seriously, I could just swim in the prose of this novel as if it were a warm, dark sea. The atmosphere, story, and wide cast of characters are all unique and compelling. This is definitely one of the better bodice rippers I've read, and probably the best-written one to boot. If you're a fan of epic, atmospheric stories like OUTLANDER, where half the fun is the journey and the delay of gratification when it comes to unresolved sexual tension, you should pick up THIS OTHER EDEN. I don't think it will disappoint.

On to book two!