Dance with Me by Alexis Daria 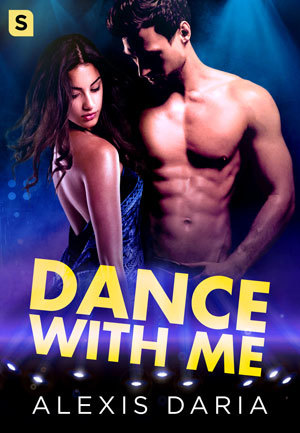 I loved everything about the first book in the Dance Off series. TAKE THE LEAD had everything going for it: sexy hero and heroine with off-the-charts chemistry, fun reality TV show setting, competition, slow burn romance, #ownvoices WoC heroine whose cultural heritage adds to the book without feeling like a "diversity tickmark," and an amazing cover. Only an irritating Big Misunderstanding in the last act kept the book from getting five stars. It was amazing.

Since I loved Gina so much, the idea of reading a story featuring her friend (also #ownvoices, also Puerto Rican), Natasha, was really appealing. And her love interest is a Russian dancer-turned-judge, with a dash of the forbidden (conflict of interest). Plus, that cover - again, super awesome. It seemed like I was being set up to love this story and I was totally down -

- and then the book went and let me fall.

Oh my God. So, basically everything I loved about the first book, this book went and did the opposite. Instead of having a strong heroine and hero who are into each other, we have a heroine who makes terrible life choices (money trouble, relationship drama, irresponsible, mommy issues, "dark" past), and spends most of the time either crying, using sex like a drug, or whining about how she doesn't deserve to be loved. The hero, Dimitri, isn't any better. He starts out as an alpha male who quickly turns into a domineering alphahole: this is a manwhore turned monogamous storyline, and he basically spends the entire book trying to "trap" the heroine into marrying him, ignoring her "nos" or her signals, pushing her into having sex with him, having her move in with him, and when she gets an injured leg, carrying her around all the time even when she doesn't want to be carried, etc. Also, he's a judge and the show and she's a contestant, and after Gina and Stone's relationship, producers are taking a zero tolerance "showmance" policy. Dimitri knows this, knows that Natasha has money problems, and knows that she's going to get fired if they get found out - and still pursues her anyway. The most alarming scene is when she moves back into her own apartment and is with friends, and he just waltzes right in because the door is open and tells everyone to "get out." I'm sorry, but no.

There is no reality TV show setting here, because Natasha is between shows and later injures herself, so she can't dance. There's no slow burn, either, because the characters are lovers from the start, and Dimitri is the one trying to make it more than it already is. The heroine's "dark past" is that she did pole-dancing and worked at a topless bar when she was desperate, and got breast implants seemingly out of insecurity (she tried to apply to a Hooters-like bar and they told her that her breasts were too small), even though she says that they were for her. Gina was in control of her sexuality, but didn't want to be objectified or play into Latina stereotypes; she came off as strong, talented, and confident. Natasha, on the other hand, is a hot mess, and her whole "erotic dancing is something to be ashamed of" attitude, and "I wasn't worth a second look until I filled out and got breast surgery" mindset was just irritating, as was her constant jealousy of Gina. Her relationship with her mother is also obviously unhealthy and the ending confused me, because it seemed to be trying to make her out as a good person to wrap up the book with an HEA when she so clearly was not.

I don't know, guys. I really wanted to love this book, because the first one was so good, but all I feel now is disappointed. It's been a while since I felt so let-down by a sequel. (I think the last time was probably everything that came after Elizabeth Hoyt's DUKE OF SIN in the Maiden Lane series). If you're going to read this series, my advice is to start with book one and then just leave it at that. I'm still interested in this author's work, but I wash my hands of both Natasha and Dimitri.