An American Family: A Memoir of Hope and Sacrifice by Khizr Khan 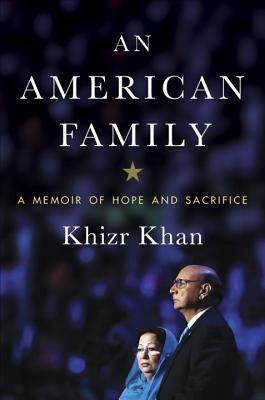 We live in a polarized America right now. One half fights for progress, and the other half appears to be actively trying to drag us backwards towards a nostalgic vision of the past that never quite existed.

One of the aspects of this current political climate that disgusts me to no end is the fact that the right has capitalized on the hate and prejudice of a few in order to secure the support and foment the rallying cry of their base. Racism, sexism, homophobia, Islamophobia - whether overtly or through careful dog-whistling, this election has allowed for some truly hateful thoughts and opinions to become the mainstream. That is perhaps the greatest tragedy of all.

A person can, strange as it seems, love America and simultaneously believe America does not love Muslims, that it is foundationally anti-Islamic (171).

When I saw Khizr Khan's memoir on Netgalley, I knew I had to have it. If the name sounds vaguely familiar to you, it is because the Khans are the grieving parents of a soldier who died during the Iraq War who Trump decided to feud with, as he has decided to feud with many. Khizr gave the speech, and Trump, disgustingly, suggested that his wife, Ghazala, was silent because she was not allowed to speak, alluding to that sexist and racist stereotype of the "oppressed" Muslim woman.

AN AMERICAN FAMILY discusses this to some extent, but mostly in the last dozen pages or so. The bulk of this short memoir is about the Khan family. They are truly incredible people. Ghazala is the descendant of Afghani royalty that later became exiled, and her grandfather was a famous poet whose works she studied for her Master's in college. Khizr was the son of Pakistani farmers, who studied law first in the Middle East, and later attended Harvard while living paycheck to paycheck.

There was so much about this memoir that I loved. His courtship with Ghazala is as grand and sweeping as a romance, and their love for one another pours from the pages. As he moves through life, he applies the tenets of Islam and his own diligent work ethic to everything he does, treating those in need with compassion even when he has nothing of his own, and taking the opportunities that are given to him. His journey is the Horatio Alger myth: the epitome of the American dream.

I landed in Houston in late 1979 carrying a single silver Samsonite suitcase and $200 in my pocket, which is the kind of detail every immigrant remembers to include, decades after the fact, when he's telling the story of how he came to make a success of himself in America (85).

Of course, knowing the end to the story of this loving, humanitarian family makes the good parts even harder to swallow. When Khan talks about Humayun, tears welled in my eyes, and they were not dry again until the end of the book. While researching further reading to suggest at the bottom of my review, I watched his speech for the first time - the one that catapulted him into the public eye and made him the target of Trump's wrath - and I began crying all over again.

War is always a tragedy, visceral and bloody evidence that all other options have failed. And yet it is often discomfortingly popular (150).

Anyone who says that Muslims are, by nature, anti-American, should be forced to read this book. It is a book written by someone who loves this country so much that he keeps a pocket-sized version of the Constitution in his pocket, and believes in its fundamental goodness with the same faith that propels him to do so much kindness in the world.

All of us are connected, woven into an unfathomable tapestry, each thin strand a necessary part of the whole. I believe every person, no matter his station, should be afforded the dignity of kings (88).

Capt. Humayun Khan, whose grieving parents have been criticized by Trump, was ‘a soldier’s officer’ (The Washington Post)

Muslims in the Military: The Few, the Proud, the Welcome (The New York Times)