An Unsuitable Heir by K.J. Charles 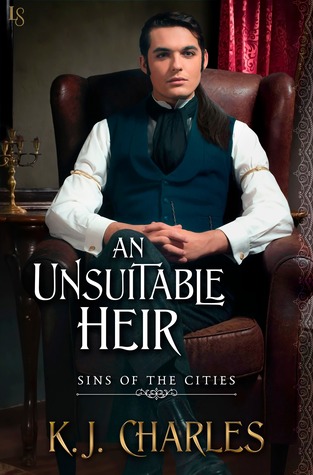 Wow, um, I'm not sure what to think about this one. I've been following this series since the first book appeared as an ARC on Netgalley, and somehow I've been lucky enough to get a copy of each book in the series as it was coming out, which makes this my first completed series by K.J. Charles.

I liked AN UNSEEN ATTRACTION, although it had many slow points and Clem was always accusing Rowley of dumb stuff. I understood where his suspicion was coming from, but man, it made for a frustrating read. AN UNNATURAL VICE was a much better book, with the chemistry between Justin and Nathaniel searing totally off the charts - and, to make matters even better, she upped the ante with the action factor, too. I had no doubts that the third book, AN UNSUITABLE HEIR, would be even better.

AN UNSUITABLE HEIR finishes where the last two books left off, this time with the two children of Emmaline Godfrey and Edmund Taillifer: Repentance and Regret. The two missing children have grown up into a two-person trapeze act when Mark finds them, and they have the striking looks of both their parents.

Mark invites Pen out for a drink intending to corroborate the facts he has with the missing heir with Pen, the suspected heir, but ends up being powerfully attracted to him. Pen feels the same, which means he feels utterly betrayed when he finds out who Mark really is and why he's there. The following 140 pages or so are a whirlwind of drama, anger, fighting, and accusations, as Mark struggles to balance his duty and affection, and Pen is thrust into a role he never even wanted.

AN UNSUITABLE HEIR is an interesting read and different from most of the LGBT+ romances I've read before because it features a pansexual hero and a non-binary hero. Their romance was fine, although I felt that Mark's character had been fleshed out more than Pen's. Pen had some great one-liners, but for most of the book he's snapping at everyone and being kind of selfish. And I get why - being non-binary in the 19th century would have been hard AF. His wariness and suspicion and utter horror at being forced to "present" as a man to be Earl, when he never wanted to be in the spotlight (outside of the trapeze act, that is) all made sense. I just really didn't like his personality.

I also don't think it was right of Mark to go behind his back. He tricks Pen into meeting the family and the lawyers, even when it was clear Pen didn't want to, basically thrusting him into the role against his wishes (and causing him to be the target of some attempted murders, to boot). Even though I liked Mark, I thought that was a pretty nasty thing to do, especially since he's 100% about consent when it comes to relationships. But apparently, "no" doesn't mean "no" outside of relationships.

I liked finding out the answer to the overarching mystery and I enjoyed K.J. Charles's writing here as much as I have in other books of hers, but I just didn't particularly care for the relationship in this one. A lot of my problems with AN UNSEEN ATTRACTION were present here, but since this is the close of the series, those flaws were much more glaring.