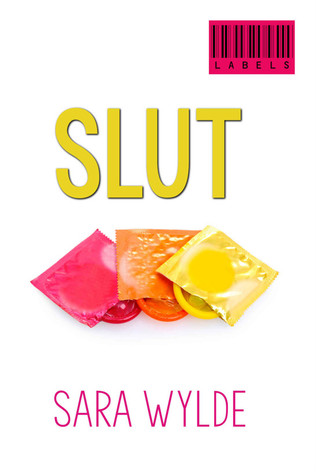 I received SLUT in a bundle of free books to review from Instafreebie a couple years ago and am only just now getting around to it. I think the romances in question were supposed to be empowering, a change from the typical alpha dude meets submissive chick and find love through sex-type storyline.

SLUT might make you do a double-take because of the title, but it's actually a surprisingly deep story. Rebecca ("Bex") used to be overweight. Her father is impersonal and her mother committed suicide, and after her mother's death, he decided to make Bex his special project so she wouldn't do the same. He forced her to have bariatric surgery (stomach staple) and then, while she was under anesthesia from the surgery, had the doctor sneak in a nose job.

Bex comes from a family of wealth and privilege, but inside she always feels like the fat girl, and she compensates for her emotional issues with sex. What makes this story more interesting than the usual "promiscuous heroine" story is her attitude towards sex: she doesn't actually like it that much - it's the pursuit that gets her off, that feeling of being wanted. The act itself just makes her feel numb, because it's utterly impersonal: there's no affection in the act.

That's something else this story does well: it really highlights the difference between sex and intimacy. Ideally, you have both - together - but you can also have intimate relationships that are platonic, and sexual relationships that are unfeeling. This book covers pretty much every combination of that, all over the spectrum, and it gave SLUT a density that many other new adult books don't have.

SLUT also tackles other topics, like bisexuality, self-esteem, love, rape culture, abuse, and age gaps. There's a lot of conversation among the characters about important things - things actual couples would actually talk about before sex or before dating. Some of these things were really insightful and had me nodding along, because it felt pitch-perfect as opposed to like totally unrealistic fantasy.

I'm giving it three stars because it's really short and I feel that development would have been better in a full-length novel. It's also rather outrageously expensive for a book that's scarcely over 100 pages - $3.99 for such a small book feels like way too much money, she said, while purchasing a $3.99 small macaron ice cream sandwich from an overpriced San Francisco bakery. But seriously, I'd like to see this author write a longer book. The short format here doesn't really do her stories justice. Also, sometimes the messages could come across as a little heavy handed. SO SWEET, by Rebekah Weatherspoon, another book in this selection, had similar problems.

If you're tired of the usual NA tropes and want something besides "girl-with-first-world-problems solves self-induced conflict by licking hawt boyfriend's abs," you'll want to give this one a try.