The Prince of Eden by Marylin Harris 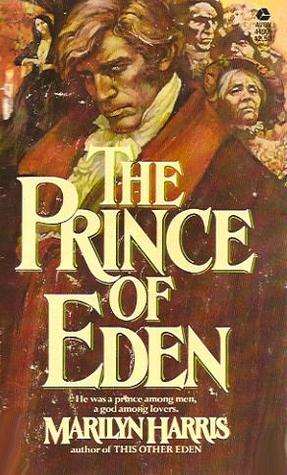 Ladies and gentlemen, I present to you the Victorian Era: Starks vs. Lannisters edition.

If you've been following my reviews, you'll know I love bodice rippers. I "encourage" all my friends to read them and even managed to trick my entire romance group into doing a buddy read of an especially terrible one (spoiler alert: everyone hated it).

Bodice rippers have a bad reputation. When people think "bodice ripper," they tend to picture a Technicolor book cover featuring a buxom women swooning in the arms of a shirtless hunk and a plot that contains more cheese than the state of Wisconsin. The book I tricked my romance group into reading certainly fell under that category. But while some of them are awful, there are some genuinely good ones that are either extraordinarily well-researched or else so cracktastic that the anachronisms and politically incorrect terms become, if not amusing then morbidly fascinating. (I encourage anyone interested in exploring bodice rippers for themselves to check out my bodice ripper shelf on Goodreads. Anything 3+ stars is v. good(!), and yes, I do try to discuss trigger warnings.)

The Eden series falls into both the well-researched and the cracktastic camp, which makes them extra special. The series is being rereleased for Kindle (books 1 & 2 are currently free if you have Kindle Unlimited), and Netgalley recently approved me for a copy of book 3 in the series, THE EDEN PASSION. Once I stopped screaming with excitement, I immediately picked up my ***hard cover editions*** of the first two books to binge through. The first book, THIS OTHER EDEN, is more of a traditional bodice ripper, with the hero and heroine coming to blows (literally - and it involves a public whipping) and going through about sixty different kinds of hell, before reuniting in what is more of a satisfactory ending than a truly happy one. It had its flaws, but I loved the detail and the fact that all of the characters are morally grey.

The second book, THE PRINCE OF EDEN, is a family saga - which were quite popular in the 80s, and often turned into the more "unisex" version of bodice rippers. THE PRINCE OF EDEN is about the children of Marianne and Thomas, the main couple in the first book. This book is set several decades later. Thomas is dead, Marianne is an old woman, and their two sons are middle-aged. Edward is a bastard, because despite having the same parents as his brother, he was born before his parents were married due to a technicality (read: marriage!pranks). Out of guilt, Thomas Eden bequeathed to Edward the entire Eden family fortune, as well as the estate. The legitimate son, James, received the title - and that's it. Everything he has is dependent on his brother's good will.

Obviously, there is bad blood about this, and James and his sinister and incestuous servants, the Cranfords (read: Lannisters) are planning a lawsuit with the help of the family lawyer, Sir Claudius. All of them want the Eden money for themselves, and it fills them with Impotent Victorian Rage™ that Edward is going out to the slums of London and using the money to help poor orphans and prostitutes. Edward is an idealist, and, despite seeing the darker side of humanity on a daily basis, painfully naive, cushioned by the wealth and privilege that he takes for granted and gives away freely. When that reality touches him personally with tragedy, he turns to opium for solace, and ends up having an affair with his brother's bride-to-be, Harriet Powels.

There isn't really much in the way of plot in this book, apart from the will-they, won't they matter of the lawsuit. But this book is peopled with such a broad spectrum of intriguing characters that I really didn't care. The Cranfords were so sinister and conniving. James is weak and spineless, but has occasional moments of kindness. Edward wants so desperately to do the right thing but constantly reverts to the sins of the father. Marilyn Harris is really good at making you feel things about her characters, and when bad things happen to them, it hurts. THE PRINCE OF EDEN wasn't as crazy as its prequel, but there were still a few bits of OTT that surfaced, such as baby torture, a woman who "gets off" by riding her horse without underclothes, Mr. and Mrs. Incest, Bad Things Happening in Prisons, and of course, a gritty portrayal of drug addiction, withdrawal, and relapse.

I would have given this five full stars if the ending hadn't disappointed me. I was ready to pump my fist in triumph, but Marilyn Harris yanked away my joy before my outstretched fingers had scarcely brushed it. I can't forgive her for that. I'm a very petty individual, and thieves of joy are the absolute worst criminals in the literary cannon. This is a well known fact.

Apart from that, the Eden series is amazing, and it's on Kindle, so please, please read these books, and tag me in your reviews so I can stalk your updates, because everyone knows that watching your friends read your favorite books is the next-best thing to reading them yourself. :-)