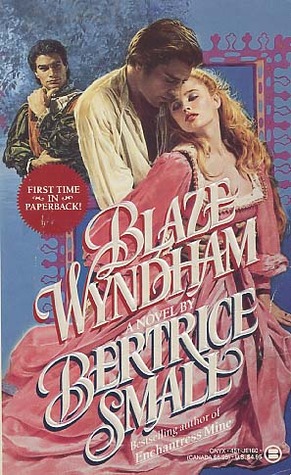 Last week, I was out drinking with friends and then took public transportation home (#DrinkResponsibly). The ride took a while, so I reached into my purse to pull out BLAZE WYNDHAM. It was my flavor of the month, book-wise, and I'd been slowly chipping away at the page count via many a waiting room, bus ride, and lunch break. The beginning was decent, but towards the middle it began to falter and get... weird. In my tipsy state, the book took on a highly comedic tone, which led me to a rather interesting (and possibly slightly drunken) philosophical thought: that if several glasses of alcohol can't breathe a lick of sense into a book, the lack of logic probably isn't due to any oversight on your behalf, but the author's.

Blaze Wyndam (nee, Morgan) is the daughter of a fabulously fertile woman. Everyone says Blaze is made for breeding, and a titled lord named Edmund is so desperate for offspring that he's not only willing to marry beneath him, but also offer Blaze a generous dowry in exchange for a crack at her advantageous proportions. But because he's a busy man, she has to marry a proxy - his nephew, Anthony - who is so taken with Blaze and her fantastic... umm... assets... that he decides to never marry another woman. (Although does that stop him from watching his uncle and Blaze do the nasty? Noooo...)

The book gets really crazy in the middle when Edmund dies in a hunting accident and then newly widowed Blaze ends up becoming King Henry VII's unwilling mistress. He has to blackmail her into it by threatening to take her children away from her. Hooray. Then he forces her to marry Anthony, who she hates because she blames him for her husband's death. All of Blaze's sisters get married to men old enough to be their fathers, and there are pages and pages of how eager these preteens are to "do it" with these older men, to the point that they even spy on other people having sex for pointers.

Bertrice Small always used to come up with these ridiculous plots. Her heroines are always uncomfortably young, there's always some jealous she-witch who's precociously sexual and is not above using such shamefully wanton acts to seduce men (the harlots!), there's always some ridiculous euphemisms for anatomy that will make you wince, food and clothing porn for days, villains - men and women alike - who are identifiable for their enthusiasm for "butt stuff," and quite often there will be twins, because Bertrice Small seems to be fascinated by twins - of the four books of hers I've read, two of them have involved twins (BLAZE WYNDHAM and KADIN). Her books usually have some pretty outlandish wtfery in them, too, which is perhaps why BLAZE WYNDHAM came as such a disappointment, especially after reading THE KADIN and ADORA, which were epic wtfests. If I had to come up with a term to describe BLAZE, I think I'd call it "domestic erotica": the entire book revolves around marriage, pregnancy, and babies. It's like someone read LITTLE WOMEN, and thought, aww, hey, a book about a bunch of independent sisters - let's make them all get married and have sex0rs and then start popping out babies by the basketful. THIS WILL BE AWESOME.

I think I figured it out you guys. BLAZE WYNDHAM is republican propaganda designed to fool women into thinking that marriage and kids is all they need out of life, and that birth control and sexual experimentation are foils of villainous harlots doomed to die for their treachery.

I'VE WATCHED THE HANDMAID'S TALE. I KNOW HOW THIS WORKS.

Some of the book's crowning achievements:

+: the word "ohhh" is used for all occasions, ranging from orgasm to childbirth to horrified shock
+: sad murder plot that goes nowhere and ends anticlimactically, but involves a poisoned nightgown
+: King Henry's courtiers try to bed Blaze to no avail, and Thomas Seymour gets hit in the face for trying
+: King Henry VII refers to his peen as his "big boy" during sex multiple times
+: Anne Boleyn and Blaze have jealous cat-fight showdown in which Blaze flaunts her naked body and says, "You think you can do better than this?" causing Anne to flee in jealous tears

Here are some of my favorite quotes/euphemisms:

His mouth closed over one of her nipples, and he drew sharply on the sentient little crest (92).*

*Note: on p.293, Blaze's nipple is once more referred to as a sentient little tip.

"Ahhhhhhh," groaned the king as he pushed deeply into her, "now my bird truly has found its way into your sweet little nest!" and he began to pump her vigorously with long, deliberate strokes for some minutes (203).

"Aye, sweetheart, here is the big boy that earlier played havoc within your sweet sheath!"

Description of orgasm: She soared like one of her hunting birds from the falconry. Soared straight and true into the burning blue of the heavens until she thought she could go no higher, only to discover that beyond the blue lay a new zone of fiery gold. Uncaring of anything, she hurled herself toward certain destruction, and she cared not, because it was too wonderful. The pleasure burst over her like honeyed wine, and at the same time she heard him cry aloud with satisfaction as his own passion exploded (294).

Overly sexual villain-woman's speech: "Tell me, have you ever shared a woman, the three of you? I have more than enough to go around. You could have me one at a time, or I have even been known to take three men at once. One of you in my burning sheath, which even now aches to be stuffed with a hard and throbbing cock such as I know you each possess. One of you in my ass, for my French and Italian lovers schooled me well in that particular perversion. The third in my little mouth, but do not be fooled for I am able to swallow the largest cock after I have tongued it to pleasure" (309).

Part of me wants to give this book a 1-star because it was pretty bad, even by Bertie standards. But on the other hand, it was so bad that I'm kind of in awe. It's like one of those viral fail videos, where the fail itself is so perfectly executed that it almost, almost is an art onto itself.

I'm still not 100% sure that this isn't propaganda of some sort, though.