The Raven Prince by Elizabeth Hoyt 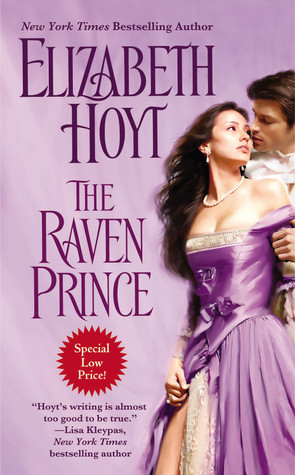 THE RAVEN PRINCE was the Unapologetic Romance Readers' December book of the month pick, and I barely scraped by, finishing the book on December 29th. But I did scrape by, and am proud of it! I was initially excited that RAVEN PRINCE had run, because I really liked the other book I'd read in this trilogy, THE LEOPARD PRINCE, and this one was supposed to be even better.

Here's the thing about Elizabeth Hoyt - she's really hit and miss. When she's on her game, she hits balls out of the court left and right. She's written one of my favorite historical romances of all time (DUKE OF SIN). But man, when she's not on her game, the results are - in keeping with the sports metaphors - foul.

THE RAVEN PRINCE isn't a bad book. Most of the members in our buddy read really liked the book, and I did, too. But it isn't a prime example of Hoyt's works by any means and suffers from some major problems which I'm going to discuss.

The plot is pretty simple. Anna Wren is a widow who is living in poverty with her mother-in-law, Mother Wren, and a loyal servant named Fanny. They're running out of money and on the cusp of making the terrible decision that no lady should make: starve in dignity like a lady or work like one of the peons? *rolls eyes* Luckily, Anna is able to secure a prestigious position as the local Earl's secretary, and he is none the wiser at first because she's hired by his man while he's on a trip. When he gets back, he admires her work before he learns of her sex (again, very luckily), and he decides to keep her on as a lark, and because she makes his naughty bits feel funny.

There's a bit of a Beauty and the Beast element to this book, because the Earl is terribly scarred all over because of small pox. I was wondering why this sounded so familiar, and then it occurred to me that I had read a book with the same trope earlier this month: Tessa Dare's THE DUCHESS DEAL, except in the case of the duke in that story, the result of the scarring was fire from explosives. Anna is attracted to the Earl but her late husband cheated on her, so she doesn't want to jump into anything with another man because she is so damaged emotionally. #notallmen

There's a side plot where Anna ends up making the acquaintance of two prostitutes named Cora and Pearl, and they end up owing an Anna a favor when she saves Pearl from dying in the road. Anna decides to go to this brothel named Aphrodite's Grotto because she knows that the Earl plans to go there and she wants to sleep with him incognito, by means of a mask. Cora makes arrangements and the Earl has THE BEST LOVINS EVAR ™, so he comes back several times, but Anna has second thoughts and ditches him on what is supposed to be the third night, bemoaning her virtue and her feelings. There's also another sideplot involving blackmail (and the woman who cheated with Anna's husband), and the Earl finds out who Anna is and offers her marriage (in anger, at first) - except he's engaged to another woman so first he has to call that off, and while he is, Anna is contacted by the blackmailer and runs away, and there's drama, but then everyone winds up happy, the end.

There were several reasons I didn't like this book as much as I should have. I don't generally like stories where the characters have sex with each other not knowing who the other is. It feels icky. There was only one book that I didn't mind that trope in, and that was a bodice-ripper; I expect those kinds of shenanigans from bodice rippers. The way Anna reacted afterwards just felt so convoluted, too. She was very emotionally vulnerable, but that disappeared whenever it was convenient to the plot, so she came across as undeveloped. Same with the Earl. Sometimes you read about characters who feel fully fleshed out and human, and you feel invested with them. These characters felt like little puppets moving around on a stage. I didn't feel invested in them at all.

Another trope this book employs that I don't like is the "I was barren until I ended up with the right man" trope. I tried to tell myself that maybe Anna wasn't barren, but her husband was - but then I remembered that her husband was cheating on her with another woman, and (it's heavily implied) got said OW with child. Of course Anna is only able to have children when she ends up with her true love. *rolls eyes* I don't know, something about this feels vaguely ableist, like it's sending the message to barren women, "Oh, you're just not trying hard enough" or "you're just not with the right person." It feels gross and manipulative, and I don't like this trope at all - but it's used a lot.

I did like the fact that Anna wasn't another virginal widow (another trope I hate), and her relationship with her mother-in-law was genuinely touching. All the secondary characters in this book are also excellent, like Hopple and his bumblebee and frog waistcoats, the cranky and mutinous Davis, Cora and Pearl (of course), and Mother Wren. They actually stole the show from the main characters, which is a problem. But the writing is good, and the garden scenes (there were several) are so magical that they reminded me of the reveal in THE SECRET GARDEN, and there were some pretty steamy moments in THE RAVEN PRINCE, so I guess I can't fault it **too** much.