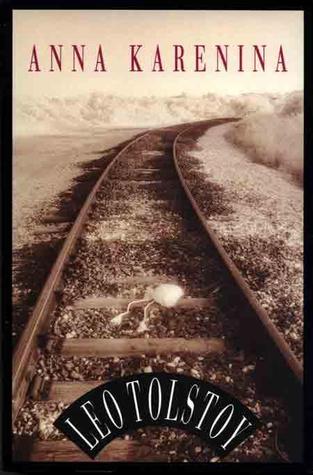 You would have thought that I'd have learned my lesson after reading THE BRONZE HORSEMAN, but no - apparently this is the year of emotionally wresting Russian love stories. One of the more "heated" debates in my romance group is whether a romance, by definition, must have a happy ending. Most of the people in my group say yes; but I'm a pessimist, and I say no. With ANNA KARENINA, however, I can actually see the merit in reclassifying it as a "love story" and not a romance, because what occurs between these characters is less a romantic interlude than an intrigue of tempestuous thoughts, emotions, and chaos.

Basically, Anna is married to this old dude named Alexei, and ends up having an affair with a much younger man named Vronsky. Her husband finds out and the result is a major fustercluck, where the decision to get a divorce and the matter of custody both become heated debates. Anna selfishly continues to pursue her relationship with Vronsky, and ultimately ends up pushing him away, because Vronsky is just as selfish and doesn't really appear to see people as people so much as abstract concepts that loosely orbit his own desires and sense of self. Juxtaposed against this is the relationship between Stepan and Dolly; Stepan has affairs as well, but because he is a man, his wife must deal. IT IS CRAY.

Like Dickens, Tolstoy's writing still feels very modern because even though the particulars have changed, human nature mostly remains the same. I have a friend who is Russian and she explained some of the concepts of the Russian psyche that Tolstoy was writing about: namely, intense pride and the need to always be right (or at least, to not concede an argument). She also said that this edition is a really good translation, so if you're one of those people who - like me - always wonders whether the translator did their homework, this one apparently did.

Despite that, I couldn't really get into this book. It was way too long and I skimmed the last 100 pages because I'd had enough of these families and their drama. It's also intensely depressing. That last scene with Anna, and the fact that she changed her mind, cut deep. In many ways, ANNA KARENINA reminds me of MADAME BOVARY and THE AWAKENING, in the sense that the wayward woman is punished for wanting more and daring to dream beyond what society allows her. But said woman is also so selfish that the reader has trouble investing in her emotionally. I could appreciate the writing and the characterizations and even the story, but I felt I was missing a lot because I didn't have context for the culture and the history. That's the benefit of learning these types of books in schools; you are literally saturated in context and then, later, tested on your understanding of it. Reading these books independently means being able to enjoy them at my leisure, but then, conversely, also means that I run the risk of missing crucial points or having things go over my head.

I'm glad I read ANNA KARENINA but I don't think that this book is for me. Some classics just aren't "fun" and to me, this is one of them. So, since I rate purely on enjoyment and NOT literary merit, I'm going to give ANNA KARENINA a 2. It wasn't awful and got me through some lengthy jags spent in waiting rooms and bus seats, but it wasn't particularly enjoyable and the ending harshed my mellow.