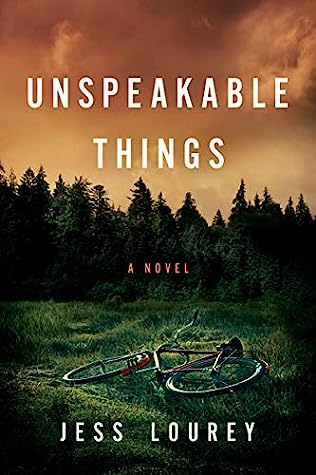 Wow! It's been a while since a book made me so uncomfortable. Jess Lourey writes thrillers set in the 80s that take a decidedly unglamorous look at the decade that everyone loves to fetishize. In UNSPEAKABLE THINGS, she doesn't shirk from portraying how secrets can fester in close-knit communities, and how people could casually be racist and homophobic while also facilitating creeps of all kinds and flavors with the patriarchal sexism that was kind of embedded in society at the time and taken as the status quo.

After reading the author's other book, LITANI, which is about cults, I was excited to read this book with my friend, Heather, who is the person who pointed me towards this author in the first place (thank you thank you). The book is narrated by thirteen-year-old Cassie who is excited about high school and just living her best life, but that joy of growing up is tarnished by her creepy alcoholic father and an even creepier pervert who is raping and molesting kids in her town. Rumors abound and there's no shortage of suspects, and the real horror may be closer to home than anyone would like.

Lourey did such a good job making me worry about Cassie and her sister, Sephie. Through Cassie's naive eyes, we see a town that is suspicious of outsiders but also way too forgiving of its own townsfolk's sins. I have no trouble believing that small towns in the 80s really were like this. You hear so many #MeToo stories from people who were the victims of those that people never held accountable and were sometimes permitted to operate in plain sight. A story like this easily could have felt exploitative or done for shock value, but I was relieved that the author went light on the details.

I'm giving it a three star rating because there were things I really liked but the pacing felt off and I wasn't quite as engaged with the narrator as I would have liked to be. I agree with Heather, who said that this story felt more polished in some ways, but I think I liked the story and the creep factor of LITANI better, even though it did end up being more predictable. I don't know, I just kind of vibe with a creepy cult tale. Some people will probably find this book very triggering, so please keep in mind that child sexual abuse is a theme of this book, as well as scenes depicting grooming and threatening behaviors. I would also disagree that this is YA. Even though the narrator is a kid, I feel like the tone and the story are very much adult in theme and geared towards adults.

Jess Lourey might be one of my favorite new discoveries of the year. All of her books feel like episodes of some sort of horrific TV show that could be called "Why 80s Minnesota Sucks." I'm two for two so far in liking what I've read by her, and I can't wait to see what other thrillers she has under her belt.