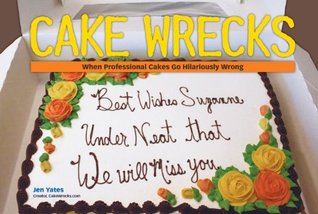 A lot of these "found and submitted" collections of humor books can be really mean-spirited and the jokes in them doesn't always age well from their origins of being meme dumping sites/blogs. But CAKE WRECKS actually holds up pretty well. Part of that is the author's good-natured sense of humor, which ends up being wholesomely sarcastic, and part of that is the subject matter, which conveys a kind of innocent obliviousness. We've all given or received cakes, and some of those cakes have been ugly. It's hard to be mad at someone who gives you a cake. Even if said cake is ugly AF.

CAKE WRECKS has several sections. There's one of blatant misspellings and errors, one for sexual cakes, one for chocolate frosting jobs that look like literal shit, creepy baby cakes, creepy animal cakes, and cakes that will have you going WTF. I didn't know divorce cakes were a thing, for example, but I guess there's enough of a market for them that they actually have a name. In the beginning the author has a funny foreword where she talks about how this is a curation of her sense of humor, and I did agree that most of the selections were pretty bad... except the "May the Fourth" cake. She seems to think that it was a typo and jokes about how the person who wrote that caption must have had a lisp, but May the Fourth is an actual thing. It was even a Star Wars themed cake. It was a May the 4th cake.

If you're going to get one of these meme books, I'd have to say that this is the best one so far. The captions are funny, the images are hilarious, and I like the efforts that went in to keep this from feeling like a total cash-in. She includes interviews and behind-the-scenes stories about some of the submissions, which I really liked. It definitely feels like some work went into polishing this up.