The Duke Goes Down by Sophie Jordan 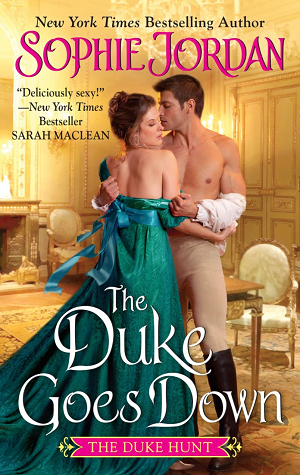 My sister knows how much I love historical romances and she keeps an eye out for them whenever she thrifts. This was one of the books she came back with and I was really excited because I almost bought the book when it went on sale on Kindle but didn't because I'd read one of this author's YA titles and did not like it, which made me Afraid.

THE DUKE GOES DOWN is actually a really great concept. It's enemies to lovers (YES) and the heroine is the one who is the real dick in the equation (which is kind of refreshing). Imogen is the daughter of the local vicar and helps take care of him and write his sermons. She hates Lord Peregrine, the duke-to-be of their lands and has ever since she heard him and his friends shit-talking her. There was also an incident where she out-fished him as a kid in front of his sister that ended up with her being humiliated. Imogen kind of has a sore spot when it comes to entitled men taking advantage because of her own ill-use by a dude, so the entitlement of Perry really galls her.

Which is why she's not all that unhappy when he's revealed to be illegitimate and loses all of his prospects/titles. And when she sees him suddenly deigning to court the wealthy but untitled ladies in town, kind of starts spreading rumors about him, everything from how he has twelve toes to how he's bad to how he can't kiss to how he has the pox. And when Perry finds out, man, is he pissed. He's decided a bitch must be taught: and that bitch is Imogen.

So often in historical romances, I'll be reading a book where the story is great and the characters have great chemistry, but the sex scenes are shite. I'll be reading along, and be so excited for the moment when the characters FINALLY do it, and then I'll be like "ew, why did you call his peen a flesh sword?" or, "nooo, don't call it cream." It is SO DISAPPOINTING. That did not happen here. The sex scenes were great! But the chemistry between the two characters was sorely lacking and there really wasn't much in the way of plot. The ending felt super rushed, almost blink and you'll miss it. And then there's an epilogue and I was like, "Okay, wait, so they love each other now?" WHY.

This isn't a bad book but it does feel unfinished. I probably won't continue the series.