The Marriage Lie by Kimberly Belle 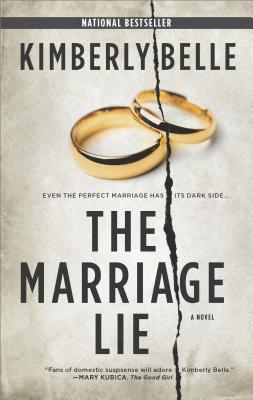 I can't remember the last time I read a book where I wanted to slap the heroine every other page. THE MARRIAGE LIE is that center part of a Venn diagram where the two interlocking circles are labeled "domestic thriller" and "book I bought at the airport because they were all out of Tom Clancy." Iris thinks she has the perfect married life with her husband, Will, until there's a big airline crash and she finds out that, contrary to what she thought, her husband was on the plane. A plane going in the wrong direction of where he said he'd be.

More and more inconsistencies pile up and Iris realizes that her husband wasn't the man she thought he was. That he might have done something terribly wrong. As she works her way through her grief, she basically acts like the worst person ever, screaming and blowing up at everyone while refusing to hear a negative word about her husband or deal with his death. Which I totally understand is a part of grief. But it did not make it easy to like this heroine, especially when she trumpets, "I'M A PSYCHOLOGIST!" before barging into every stupid interaction she puts her in. Like, lady. I'm not sure you know what psychology IS.

The whole book kind of feels like a low budget direct-to-DVD action movie for women. Which isn't a bad thing. But it also didn't deliver the twists and intensity that I was hoping for. It ended up becoming pretty predictable, and while I was invested enough to read the book to the end, I was kind of mad when I put the book down. What even WAS that ending? It's like the author thought Iris needed to be even more unlikable, just to really hammer down the point. The writing style is clean and easy to follow and the pacing was done well (hence why I couldn't put it down), but there were a lot of questions left unanswered and it's not clear where Ms. I'M A PSYCHOLOGIST will end up now.

I'd probably read more from this author but I wouldn't recommend this book. Also, I just realized that even though I said it's basically "airport fiction," what with the whole plane crash subplot, I'm not even sure I'd recommend this for airplane flights, unless you're a masochist with a sick sense of humor.