The Lawyer's Luck by Piper Huguley 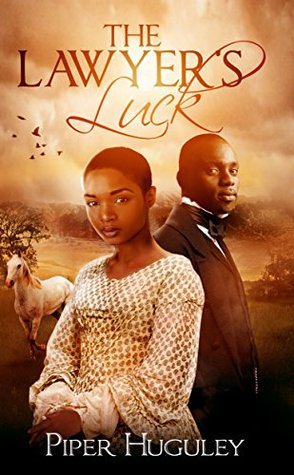 I picked up THE LAWYER'S LUCK because it was a freebie in the Kindle store, and because I'm actively trying to read more romance novels featuring PoCs because when I tallied up my reads from the last year, I found that, with the exception of some Beverly Jenkins and Courtney Milan romances, I was sorely lacking in that regard.

THE LAWYER'S LUCK offers a fresh perspective of what it was like living in the Antebellum South. Lawrence is a mixed race man of Native American, African American, and white ancestry who is studying to be a lawyer. On his way to take his exams, his horse is stolen by a runaway slave named "Realie." He accidentally shoots her in the arm when she takes her by surprise and ends up rupturing an artery. Obviously, he feels terrible about this, and he insists on finding a doctor to patch her up before deciding what to do with her.

Unlike many slave stories written for titillation, Realie's situation isn't particularly bad. She isn't raped, she lives with her entire family, she doesn't have to do backbreaking labor in the fields. But when Lawrence - rather insensitively - points this out to her, Realie tells him that that isn't the point, and it isn't until Lawrence really gets to know her that he understands that slavery isn't just wrong because it inspires cruelty: it's wrong because it's the enslavement of another human being, and a deprivation of those essential human rights to life, liberty, and the pursuit of happiness.

I enjoyed THE LAWYER'S LUCK. Realie was a strong female character who wasn't afraid to take risks if it meant getting what she wanted. She isn't educated, but she's smart, and that shows in her decision making, and the insights that she has in the narrative. Lawrence is a great hero, too, who's a bit blind when it comes to his privilege (which I thought was also well done), but who wants to do the right thing and is willing to develop and grow, even if it means admitting that he's in the wrong.