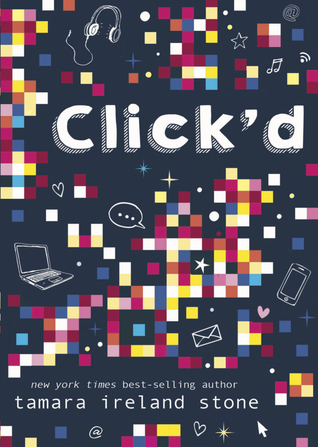 I was honestly surprised to receive an ARC of this because Disney-Hyperion never approves me for anything.

But they did, so I was like, "Bleep yeah! Girl coders!" I took a coding class in high school. It was one of the most difficult classes I've ever taken, but it was also one of the most satisfying. Every time I figured out the code to make a program work, I felt so good. It was the ultimate mental rush, like forcing checkmate in a difficult game of chess; I'd often feel energized after leaving that class, ready to take on anything.

I'm trying to read more books about STEM (science, technology, engineering, and math) heroines, so combined with my (abbreviated) history in coding and technology, CLICK'D was an easy pick for me. It's about a twelve-year-old girl named Allie competing in an app competition called "Games for Good." Her game, "Click'd" is basically a combination of a Buzzfeed quiz and Myspace (circ. 2007): users answer questions and get matched up with other users, and based on the ways they answer questions, are ranked on a leaderboard within the app.

Allie's game takes off at her school and pretty soon she has over 1,000 users. But there's a security risk embedded within the site, and she decides not to say or do anything about it because she's afraid it might compromise her place in the G4G competition. Pretty soon, though, it's clear that more than just her users' data is at risk, and when she tries to tinker with the code, things go horribly wrong.

I really liked how programming and coding was at the forefront of this story. I also liked the G4G competition, although Allie's game wasn't exactly a humanitarian cause (now the girl who did the app about grooming girls in 3rd world countries to become teachers? can we get her story?). Allie in general kind of cheesed me off over the course of the story. She was incredibly selfish, and the way she treated Nathan towards the end of the book made me really angry. I get why she felt the way she did, and I probably would have jumped to the same conclusion as a preteen, but I was still like, "OH, YOU LITTLE SHEET."

This book was a little young for me (I didn't realize it was middle grade when I applied for it), but it's a great story with a good moral and a subject that's becoming increasingly relevant in the information age. Would not recommend this to fans of older YA, but for younger girls who are interested in math and computers and teachers who want to supply books for them as a resource and/or inspiration? Yes.