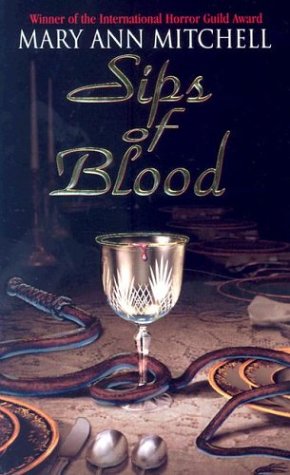 Taking famous crazy people throughout history and turning them into vampires is not a novel concept. I've read a number of vampire stories about Vlad the Impaler, Elizabeth Báthory, and the Count of St. Germain. Marquis de Sade is another obvious choice, given that his love of hurting people got him his own eponym (i.e. "sadism").

SIPS OF BLOOD is a weird, disorganized novel that has the same gritty, grungy feel as another vampire novel I read a while ago called DAUGHTERS OF THE MOON (one of the Elizabeth Báthory stories I referred to earlier). SIPS OF BLOOD is about three vampires: Louis, Marie, and Liliana. Louis is the Marquis de Sade and he is crazy. Marie is his mother-in-law and she is also crazy. Liliana is Louis's niece and she is crazy, but way less crazy than her crazy vampire relatives, and tries to go the "vegetarian" vampire route a la Edward Cullen by feeding off small rodents and the blood of corpses at the morgue where she conveniently works.

There isn't really much of a plot, apart from, "Gee, I'm a vampire, how can I get me some gross vampire sex?" Marie tries to seduce her neighbor's son, Wil (one of the few characters in this book I liked, so obviously bad things happened to him), and most of the book is about her pursuing him in a way that gives new and terrifying meaning to the word "cougar" while her other love interest, a married man named Garrett, mopes on the sidelines and tries to satisfy his desires while being ignored by his mistress. He ends up getting AIDS, and then is tortured and murdered by Louis. Louis decides that he wants to have sex with his house-keeper's seventeen-year-old daughter (did I mention that he looks seventy?) and for some reason, Cecelia is totally game for this... uh... okay. I kept hoping that Liliana and Wil would get together, but she ends up getting raped by two different guys (one of whom is her uncle) and then murdered by being literally torn apart by rogue vampires after getting impaled on a fence.

This was a very strange and unpleasant book. I couldn't put it down because I was filled with a morbid fascination to keep turning the pages and find out what happened to the two characters in this book I actually cared about. People suffered a lot in this book, which isn't surprising considering who this book is about, but the extent of the cruelty still took me off-guard.

Also, there were a lot of typos in here - especially towards the end. "Jealously" was used instead of "jealousy" (or vice-versa), there were a couple misspellings, and at least once, Wil's name changed to "Will" and then back again on a page. Not sure if these were conversion errors from when the book was turned into an e-book or if they were in the original text, but that was extra.

P.S. It took me an embarrassingly long amount of time to figure out that Louis and Donatien were both referring to the same person. Whoops.