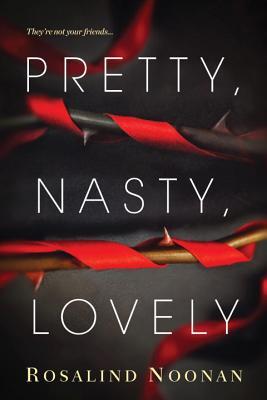 I find sororities fascinating because they're so paradoxical. The bond of sisterhood and friendship is very affirming, very feminist; but the upholding of stereotypical gender norms and extreme femininity is kind of the opposite of feminism. Naturally, whenever I find something fascinating, I try to read about it as much as I can. PRETTY, NASTY, LOVELY is the second sorority-themed book I've managed to get my grubby mitts on. The first was called RUSH, and it was straight-up chick-lit that captures perfectly the party culture mentality of the mid-2000s. PRETTY, NASTY, LOVELY, on the other hand, is a thriller cast in the mold of Megan Abbott's girl noir fiction.

Emma Danelski joined a sorority because she was looking for that bond of sisterhood. She sort of found it, but only with the other outcasts; her relationship with the other girls is fraught with tension and a sense of betrayal. She was courted during Rush, only to be shoved aside as soon as she began paying her dues. Not only that, but Emma quickly realizes that the other girls have problems of their own that run the gamut from eating disorders to blackmail, and have no time for her own issues. And Emma does have issues. She is guarding a terrible secret that some of the other girls lord over her, and that secret threatens to come to light when one of her sisters, a troubled girl named Lydia, is found dead.

Everyone thinks it's suicide. But is it, really?

PRETTY, NASTY, LOVELY doesn't have a lot of reviews or hype, which shocked me, because books like these - thrillers about troubled women - have become so trendy with the success of titles like THE GIRL ON THE TRAIN and GONE GIRL. PRETTY, NASTY, LOVELY is more Megan Abbott than Gillian Flynn, and I was honestly shocked that the publisher didn't jump at the opportunity to tout that similarity in the blurb (even though I loathe such "If you liked X, then you'll just loooooove Y!"-type comparisons). The problem, I think, is that it has no clear audience. The parts narrated by Emma (and, occasionally, some of the other girls) are very much new adult. But then, bizarrely, some of the adults have POVs too, like Dr. Finn, who is dealing with an obsessive and emotionally manipulative wife as well as his guilt over being unable to prevent Lydia's death, and Dean Cho, who wants to create a suicide prevention task force, as well as help the cops with the investigation to the best of her ability, but whose heavy-handedness harms more than it helps.

There are a lot of great subjects in here, important, controversial subjects - suicide, abortion, mental health, racism, classicism, psychological disorders, family, sisterhood, friendship, marriage, etc. - and for the most part, I felt that the author handled them pretty well, which made me think of Megan Abbott again because she handles a lot of those dark, unpleasant sides of girlhood and womanhood, the grit underneath the glamor, so to speak, no matter how unpleasant it is to read about.

This book would have scored a higher rating for me, if it weren't for the fact that (1) I felt like it attempted to accomplish too much, and ended up glancing on a lot of stuff it should have fleshed out more and wallowing in material that could have been cut; (2) the predictability of the ending and the villain(s); and (3) the bad way the POV swaps were handled. They were not labeled, and sometimes occurred mid-chapter, so it could be difficult to keep track of who had the floor at the moment.

That said, I think if you enjoy Megan Abbott's work, you'll probably enjoy this. I know I did.