The Bronze Horseman by Paullina Simons 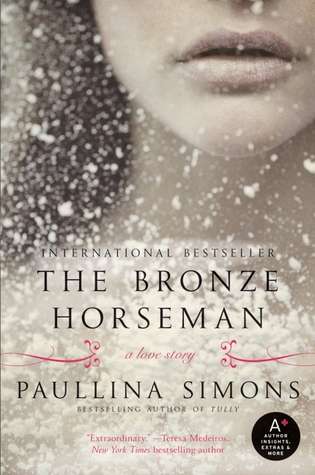 I read a lot of romances, so by now I have a pretty good idea of what I like and what I don't like. I don't tend to like romances about cheaters, hence my scathing review of the trash people in Molly McAdams's cringily-titled SHARING YOU, but sometimes if the story is good, I can make an exception or at least enjoy the story in spite of the cheating, like my favorable review of the trash people in Joan Dial's BELOVED ENEMY.

THE BRONZE HORSEMAN is a polarizing book among my friends and looking at the reviews, I guess what it comes down to is this: can you enjoy a book that's about trash people treating each other like garbage if the story at least is good? If yes, hop on this drama-filled train to Literary No Man's Land, where the heroine buys ice cream and caviar with her family's food money during wartime and the hero dates the sister of the woman he loves to hide their relationship from a man he knows wishes them ill.

THE BRONZE HORSEMAN is set during WII and covers the horrifying Siege of Leningrad, a period of terrible starvation in the middle of a cruel Russian winter that was the result of a German blockade. Tatiana Metanova struggles to survive with her family while also dreaming after the soldier she fell in love with on a summer day - the soldier she found out was seeing her sister: Alexander Belov. The conflict between them hinges on one of the most cowardly displays of passive-aggression I've ever seen, masquerading as selflessness. Tatiana doesn't want to hurt her sister, Dasha, who she knows is head-over-heels for Alexander... so she doesn't allow Alexander to simply break up with Dasha and see her instead. No, they continue seeing each other on the sly, eye-f*ck around her sister, and moon over each other, while Tatiana sort-of-but-not-really sees Alexander's friend, "Dimitri." Someone suggested to me that it would be difficult for Tatiana to live in the house with her family and share her bed with her sister, knowing that they all hated her for breaking up Dasha and Alexander, but that didn't go so well for Tatiana, anyway, did it? Tatiana's bitterness and resentment drove a wedge between her and her sister, anyway, and I felt like the author worked extra hard to make the cheating seem "okay" by making Dasha seem slutty, temperamental, selfish, and lazy.

To Simons's credit, the characters were all very well done, and war time does bring out the worst in people (I'd imagine) - or the best. So we see humanity across the spectrum, sometimes doing unexpected kindnesses, sometimes taking advantage, sometimes being unspeakably cruel. The "romance" aspect was one of the shakier elements to me, because Alexander wasn't my ideal romance hero by any means. He's weak and violent and full of rage, which he attempts to channel into honor. In some ways, he reminded me of Thomas Eden, from THIS OTHER EDEN. Thomas Eden was utterly obsessed with the heroine, had her publicly whipped before his people, and then went to extraordinary lengths to get her to be his by manipulating everyone around him. But he was also weak, and had only his honor to stand behind. That was how I felt about Alexander. He never whipped Tatiana, but he threw things at her, grabbed at her, yelled at her, and wouldn't listen to her when she said "no" or "stop." He had a tragic history because his parents were naive fools, and his manipulations kept him from safety and plunged him into a vicious circle of paranoia and debt.

Tatiana, on the other hand, did have some character development. She was like a pale imitation of Scarlett O'Hara, in the sense that she would survive anything and do what was necessary...but unlike Scarlett, she'd usually only do it for Alexander. (Maybe that makes her more like Melanie, who was selfless and kind of a doormat, but a doormat made out of steel instead of straw.) I liked her more when she became a nurse and started learning English, because that made her more interesting to me than the childlike (very childlike - at one point, Alexander refers to her as a "child-bride") heroine who was always bouncing up and down and clapping her hands like a five-year-old when she wasn't trying to hump Alexander's leg with the enthusiasm of a small poodle hopped up on Viagra (seriously, 200 pages of this book in the middle section are basically just smut). By the end of the book, I was having pleasant flashbacks to my first time reading Patricia Hagan's LOVE AND WAR, a bodice-ripper set in the Civil War with a female doctor as the heroine.

In short, I did like THE BRONZE HORSEMAN, despite its unlikable characters. The setting was great, and so convincing that I half-felt like I ought to perhaps conserve my dinner, too. It definitely made me extra grateful for my warm quilt that night. The antagonist, Dimitri, was also well done, and the shadow he casts over this story line is long and enduring. I didn't like him from the start, and my dislike of him only grew as the story went on. The romance, to me, felt less romantic than... I don't know, a portrait of an utterly dysfunctional and all-consuming passion doomed to end in tragedy, rather like OUTLANDER or ROMEO AND JULIET. This is not a selfless love, or a good love, or a love that ought to be emulated by others: instead, it kind of felt like a love story between two flawed characters trying to fill the holes in their soul with raw, unfiltered passion with such desperation that they didn't care who got hurt, or how they were hurting each other (and they did hurt each other quite a bit). If you don't care about cheating or selfishness or heroes that borderline on abusive, and enjoy watching literary train wrecks in action, then I encourage you - completely without sarcasm, mind - to pick up THE BRONZE HORSEMAN. It's a f*cked up ride with one hell of a view.