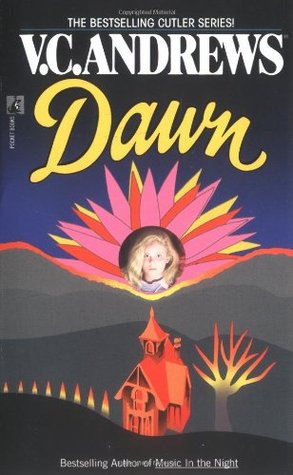 I missed out on V.C. Andrews as a teen, so I'm accumulating as many of them as I can now. You know, for science. So far, I've mostly been reading the ones that were originally written by V.C. herself and not her ghostwriter, Andrew Neiderman. The Dollanganger series was excellent and so was her one standalone book, MY SWEET AUDRINA. HIDDEN JEWEL was a Neiderman effort, but I thought that one was reasonably okay, even if it lacked that special brand of spiciness that the Dollanganger books had. DAWN is one of Neiderman's earlier efforts, published just four years after the real V.C. Andrews died. I expected it to be even better than the Landry book I read, since it was published earlier and - I figured - he'd probably be working extra hard to do her justice.

DAWN is one weird book. Parts of it are just boring and badly written, with words repeated over and over again (especially "quickly", for some reason, which seemed to appear at least once per page), and emotions being told instead of shown via dialogue tags. "Don't be so obvious," she yelled angrily. "Be subtle!"

Good-bye to my first and what I thought would be my most wonderful romantic love, I thought. Good-bye to being swept off my feet and floating alongside warm, soft white clouds. Our passionate kisses shattered and fell with the raindrops, and no one could tell which were my tears and which were the drops of rain (227).

Sounds like she's confusing an acid trip with love, don't you think?

The plot is one part THE FACE ON THE MILK CARTON, one part MY SWEET AUDRINA, and one part FLOWERS IN THE ATTIC. Dawn and Jimmy Longchamp have always been on the move but now their dad is determined to bring some stability to their lives: he's taken a job as janitor at a private school, which means that both kiddos get free tuition as a bonus.

Obviously the rich kiddos do not take kindly to poverty in their midst, and begin hazing like it's rush week at a d-baggy party college. People mock and laugh at Jimmy, but it's Dawn who really bears the brunt of the bullying - they stop just short of parading her through the streets with a shorn head while screaming SHAME! SHAME! The only rich kiddo who's actually nice to her is the brother of Clara Sue, the mean Queen Bee who has a rage-boner for Dawn: Philip Cutler.

"Nice guys" in V.C. Andrews books can never be trusted and Philip is no exception. He quickly begins pushing Dawn to go all the way with him, fondling her in his car, kissing her passionately in public, etc. Jimmy is, of course, super jealous, even though he's her brother. And oh, by the way - did I mention that the Longchamp parents seem to think it's cool to not only have their teen children share a bedroom, but also have them both sleep in the same bed? Also, he watches her get dressed.

Anyway, Dawn thinks she's finally gotten the better of her bullies and her evil headmaster... but then her mother dies and makes a cryptic statement about forgiveness and the police come to take her father and siblings away - and Dawn finds out that she isn't Dawn Longchamp. She's Dawn Cutler. The Longchamps kidnapped her from their employers when she was just a baby to replace a stillborn.

Dawn is pulled out of school and whisked away to the elite Cutler Cove hotel, where the grandmother matriarch (who seems to be inspired by the grandma in FLOWERS IN THE ATTIC) runs a tight ship. Think Dunstin Checks In (1996) without the orangutan-provided comic relief. While there, Dawn experiences even more bullying... this time at the hands of her new relatives: Psycho Grandma and Queen Bee Mean Girl. Psycho Grandma forces Dawn into what is basically child slave labor, forcing her to work as a maid free of charge; steals and destroys some of Dawn's belongings; gives her a new name (Eugenia) and then starves her when she doesn't use it; and when someone (*cough* Clara Sue) steals a necklace from one of the guests, she basically gives Dawn a cavity search looking for it.

Philip is at the hotel, too, and at first he seems nice, but then it turns out that he's still not over that heavy petting they did together before they realized they were brother and sis. Towards the end of the book, he rapes her, saying that it's important that he "teaches" her how sex works and that it's her fault for leading him on, etc. Dawn is so upset, because she doesn't want to have sex with this brother - she wants to have sex with her other brother now that she knows that they're not related, and even takes a moment later on to wish how Jimmy was the one who got her v-card instead of Philip.

Dawn tracks down the maid who was responsible for her and finds out that she's the product of an affair that Mama Cutler had with a musician. Angry, Grandma Psycho had arranged for a kidnap by paying the Longchamps to take her away. She had second thoughts later, but was willing to let the Longchamps take the fall for it rather than have scandal befall the family. What a betch, right? So Dawn whips out the blackmail, and Grandma Psycho admires her balls and decides that maybe Dawn and her can reach an "agreement." Dawn gets send to NYC to study music and bought all manner of expensive clothes while Philip and Clara seethe, dreaming of the day when she and Jimmy can reunite and have it's-not-incest-anymore-let's-party style sexings.

This left such a bad taste in my mouth. It might actually be worst than the time that I ate a piece of dark chocolate for dessert after having kimchee for dinner (although that was pretty bad, too).