Horsemen of the Trumpocalypse: The Dirty Dealers and Defenders of the Indefensible Who Are "Making America Great Again" by John Nichols 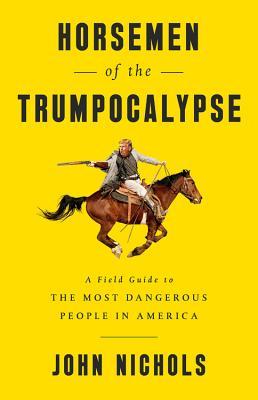 I applied for an ARC of this book because of the title alone. To be honest, I didn't even really look at the summary that carefully at first - the title seemed self-explanatory. This would be a book that analyzed but also condemned the people who voted for Trump as the dreaded harbingers of the Trumpocalypse... right? NOPE!

HORSEMEN OF THE TRUMPOCALYPSE is a bit more diplomatic than that. The author of this book does not blame the constituents; he blames the cabinet. One by one, Nichols goes through the ranks - from obviously key players like Mike Pence and Paul Ryan (and DeVos, who is mentioned twice) all the way down to people you may not have heard of like David Friedman (ambassador to Israel), Nikki Haley (US Ambassador to the UN), and Sonny Perdue (Secretary of Agriculture). Nobody is spared. Jared and Ivanka get a chapter, too, and that chapter is named after and makes references to the SNL skit with ScarJo, "Complicit."

The chapter introduces each public official, discusses their background in government (or just their background generally if they did not hold a government position prior to accepting or being elected to their post), their political platforms and ideologies... and then immediately takes them all to task for why the combination of those things makes them woefully unsuitable or inadequate for said position. By the end of the book, you'll think you've just endured a 300+ page political version of Alanis Morissette's "Ironic." It's that f*cking troubling.

HORSEMEN OF THE TRUMPOCALPYSE was a good book. I hesitate to say I "enjoyed it," because many of the chapters - particularly Rick Perry's and Nikki Haley's - left me feeling actively pissed off and/or terrified about the fate of the world and/or cynical about the fate of humanity. I did appreciate it for the knowledge it contained. Even though I consume about a 1-2 hours of news each day, I still learned so much, and clarified some of the things I already knew about but not in detail. Is it light reading, you might be asking? No. This is a very dry book but the author, who is a total snark and sees absolutely no need to turn it down, is constantly injecting these sarcastic asides. I recommend this book if you want to be more informed about the Orange House's cabinet members.