101 Video Games to Play Before You Grow Up: The unofficial must-play video game list for kids by Ben Bertoli 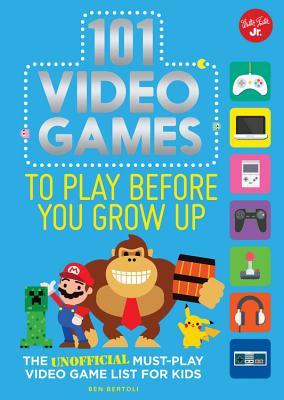 As you may or may not know, I used to be really into video games. I would play for twelve hours at a stretch and stay up all night on during summer break and weekends, playing well into the early hours of the morn. It drove my parents bonkers, but when you're a teenage gamer, you're less interested in what parents think about your nocturnal habits and more interested in how much grinding you have to do to level up to 86 magic.

When I saw this on Netgalley, I was super curious to see which games of interest Bertoli had singled out. Sometimes, the person putting together these sorts of lists has a clear bias for a particular system or genre. I noticed that with a book I received last year about the best arcade games. If I remember correctly, the author admitted himself that he had a penchant for a certain type of arcade game and its various clones.

I'm guessing that Bertoli is about my age - late 20s, early 30s - because many of the games he chose are the games that I grew up with. Crash Bandicoot, Banjo Kazooie, Spyro, Harvest Moon, Excitebike, Pokemon, Paper Mario, Metroid, Galaga, Animal Crossing, Pac-Man, and Tetris are just a few of the games he mentioned that I spent hours playing as a youth. I found that I actually agreed with a lot of his choices, at least for the consoles that I actually used.

Minecraft is on here. That game is still insanely popular with the youngins, so I guess that's a pretty solid choice, however much it's disparaged by my peers. Speaking of build-em-up games, I'm surprised Scribblenauts didn't make the cut! Someone let me play that on their DS and I had such a good time. Similarly, Fantasy Life, Yoshi Story, and Mario 64 are other highly kid-friendly classic titles that are just as addictive as they are colorful. Also, no Sims? (Maybe that's too PG-13.)

Overall, though, I was pretty impressed by the titles Bertoli compiled for this list, and the heaping dose of nostalgia it brought back was pretty good, too.