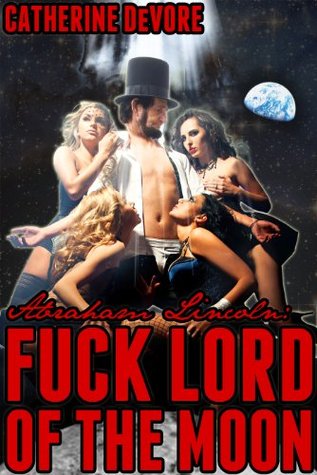 So in case you've seen my reviews on other weird books like this, I do a weekly feature called What the Actual F*** Wednesday where I ask friends and followers to send me the weirdest romance and erotica books they can find, and then I read and review one a week. Why? Because people were sending me these things even before the challenge, and now, at least, I can contain the beast.

The beast, of course, not being Abraham Lincoln, who no man or woman can tame. Which brings us to today's weekly pick: the book whose title I cannot say in this review if I want to cross-post to Amazon. But let's just say that it involves Abraham Lincoln and his social dominance over our solitary satellite: the moon.

Here is the plot in a nutshell:

I really don't have much else to say about this book. I actually feel like that bulleted summary speaks for itself and perfectly encapsulates what you can expect to find within these pages. It was awful, yes, but the author actually sort of made An Attempt(TM) to have a "historical" tone to the narrative that makes it sound like one of those awful pulp novels that are now in the public domain, you know, like the Barsoom novels, or the original Tarzan books. Except, you know, NSFW x 1000.