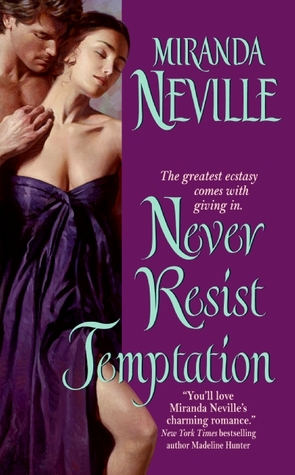 I recently scored a ton of Avon romances and I've been working my way through them, hoping to find some new-to-me authors that I'll adore. I never read anything by Miranda Neville before but I really liked the cover and the premise sounded AMAZING. Jacobin is the ward of her evol wastrel of an uncle who sells her virtue to an earl to pay his gambling debt. Rather than meekly surrender to her fate, she runs off-- allegedly to elope, but actually to dress in drag and work as a pastry chef.

She meets the earl, not knowing who he is, when he saves her from being gang-raped by a bunch of guys who still think she's a boy. The earl is alarmed that he feels attracted to her too (eek) but once she ends up pleading to work in his household, he realizes immediately that she's a girl and OH MY GOD THANK GOD HE'S NOT GAY. *eye roll*

I love gender-bending books but I do think that they often don't age well, precisely because of moment like these. There's a delicate finesse to them that some authors can pull off, but it didn't really work here and the fun of it was over way too quickly because of course, the earl figures it all out way too quickly. The beginning was super tense and really fun, with the perfect balance of food references and danger, but then it became kind of insipid.

To be fair, the author's writing was decent and there were a couple moments of sexual tension between the h and the H that seemed promising, but the story was too boring and too silly for me to want to continue. Your thoughts may, of course, differ.